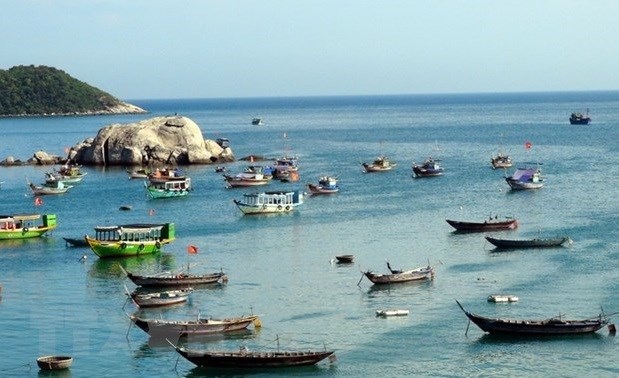 Cham Island, an archipelago off the coast of Hoi An in central Quảng Nam province

Vietnam’s commitment to net-zero emissions made at the 26th United Nations Climate Change Conference of the Parties (COP26) held in Glasgow, Scotland (the UK), shows the strong political determination in stepping up economic transformation to contribute to solving the climate crisis, Minister of Natural Resources and Environment Tran Hong Ha has said.

Speaking in an interview with the Vietnam News Agency (VNA), Ha said Vietnam’s commitment at the climate summit was appreciated by leaders of countries and big corporations around the world.

To effectively implement the commitment, Vietnam has made a very careful preparation, including the inclusion of climate change response and Vietnam's commitment to implement the Paris Agreement into the Law on Environmental Protection 2020, according to the Minister.

New points in the Glasgow Climate Pact will be incorporated into national laws to build Vietnam's domestic carbon market by 2025, putting on trial run and coming into official operation from 2028. The above regulations are also the legal basis for the mobilisation of the entire population to respond to climate change, he said.

The Ministry of Natural Resources and Environment (MONRE) has proposed the Prime Minister consider the promulgation of a decree on reducing greenhouse gas emissions and protecting the ozone layer as well as a list of sectors and establishments emitting greenhouse gases that must carry out an inventory of greenhouse gases. A system on monitoring and evaluating activities to adapt to climate change at the national level is also included.

The Minister said ministries, sectors and localities are asked to review and adjust strategies and relevant plans in line with the goal of net-zero emissions by 2050. They are also requested to proactively enhance international cooperation to take advantage of financial and technological resources and strengthen capacity to implement the Paris Agreement and the commitment declared by the Prime Minister at COP26.

The MONRE will coordinate with the Ministry of National Defence and relevant ministries, agencies and localities to conduct marine surveys to serve the offshore wind power development planning associated with the marine spatial planning and implement carbon pricing instruments, including carbon tax and development of the domestic carbon market, Ha said.

Dissemination campaigns will be launched to raise awareness and capacity for organisations, businesses and individuals participating in the market and non-market mechanisms. Action plans to reduce methane emissions by 2030 and to realise the Glasgow Declaration on forests and land use will also be set up, he said.

The Minister said leaders of the Party and State had a strategic vision, promptly grasped the trend of low-carbon development and reduced global greenhouse gas emissions, thereby sending a strong signal to the international community on the development path of Vietnam in the coming period. It has enabled Vietnam to get access to the movement of global credit and investment flows, as well as respond to the change of new "rules of the game" in terms of global trade and economy, he said.

The draft National Power Development Plan for the period 2021-2030 will be revised to align with Vietnam's commitment to net-zero emissions by 2050.