The examinees for this year’s national high school exam come from many different living conditions and localities, but they all have a strong eagerness to learn.

VietNamNet Bridge – The examinees for this year’s national high school exam come from many different living conditions and localities, but they all have a strong eagerness to learn.

Mai Tri Thuc from Ung Hoa District in Hanoi, who sat for the national high school final, completed the exam two days ago. 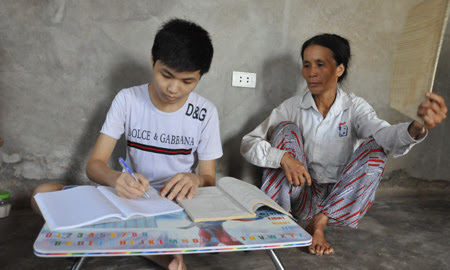 Mai Tri Thuc and his mother

Thuc, who was diagnosed with cancer when he was in the eighth grade, has had two major operations. Thuc has been told that a third surgery will be unnecessary because of metastatic cancer cells.

Despite this prognosis, he still dreams of university and is very good at natural science subjects. He plans to sit the entrance exam to an information technology school this year.

Thuc, who looks smaller than his friends, is pale and has a weak voice. He cannot ride his bicycle to school. However, he has a good friend who has been helping him in the last year.

The only examinee in the room

Only one student was seen at Quang Trung High School’s exam room in Hanoi on the afternoon of June 2. She was Khanh Linh, a student at Quang Trung School, who registered to sit the history exam.

Under current regulations, students have four exam subjects for finals, including two compulsory subjects (math and literature), and another two options. Linh was the only examinee at the history exam.

The same situation occurred at Thai Lao High School in Nghe An Province. Doan Thi Nga was the only examinee at the history exam.

He was Nguyen Ngoc Moi, born in 1961, is from the Nam Dong Continuation Education Center in Thua Thien-Hue Province. This was for his fourth time to sit the final exams. Though he failed the last three exams, he still hopes he can obtain a high school diploma one day.

There was another old examinee – Nguyen Son Tung – born in 1968, from the Thanh Xuan District Continuing Education Center in Hanoi. A father, who is trying to obtain a high school diploma at the age of 46, has a son, who is a second-year university student.

She was a special examinee at the Con Cuong High School in Nghe An Province because she was about to give birth in a few days, she told the press. And she now can sigh with relief that she has completed the exams and returned home to prepare for  important work.

There was also another pregnant examinee who came from the Cau Giay Continuation Education Center in Hanoi.

The monk attended the Gia Vien Continuation Education Center every day and studied diligently, hoping to pass this year’s exams.