The development of children born from a "freeze-only" transfer is similar to and even better than those born from a "fresh embryo" transfer, according to a study conducted by Vietnamese researchers and published in the international journal Fertility and Sterility on September 1. 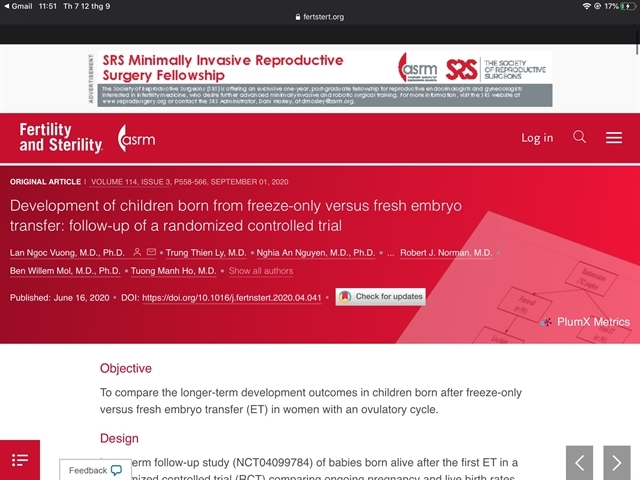 The study, titled “Development of children born from freeze-only versus fresh embryo transfer: follow-up of a randomized controlled trial”, was conducted by doctors at HCM City-based My Duc Hospital in co-operation with experts from the Obstetrics Department and Children Department at the HCM City University of Medicine and Pharmacy, and Adelaide and Monash universities in Australia.

Fertility and Sterility is an international journal for obstetricians, gynecologists, reproductive endocrinologists, urologists, basic scientists and others who treat and investigate problems of infertility and human reproductive disorders. The journal publishes juried original scientific articles.

The study, conducted by My Duc Hospital’s researchers, was of nearly 300 babies born from in vitro fertilization (IVF), according to the hospital’s press release.

The data provided physicians with additional information on which to base decisions about the relative merits of different approaches to infertility treatment. There did not appear to be any grounds for concern about worse outcomes after use of a freeze-only strategy.

However, additional studies comparing childhood development after a freeze-only strategy, fresh ET, and natural cycles are needed before firm conclusions can be drawn, according to the researchers.

The study followed up a topic which the expert Vuong Thi Ngoc Lan and her colleagues conducted, and was published in the New England Journal of Medicine in 2018 and was presented the Ta Quang Buu Awards, the most prestigious annual awards for Vietnamese researchers in 2020.

Transfer of embryos in a freeze-only method is gradually replacing the transfer of fresh embryos because the former is safer for the pregnant woman until delivery.

It’s every mother’s nightmare. Late at night, child with a high-temperature and no pharmacy open to buy any medication.