With one SEA Games already under his belt as a triathlete, he is now training for the 31st Games, in November next year in Vietnam. 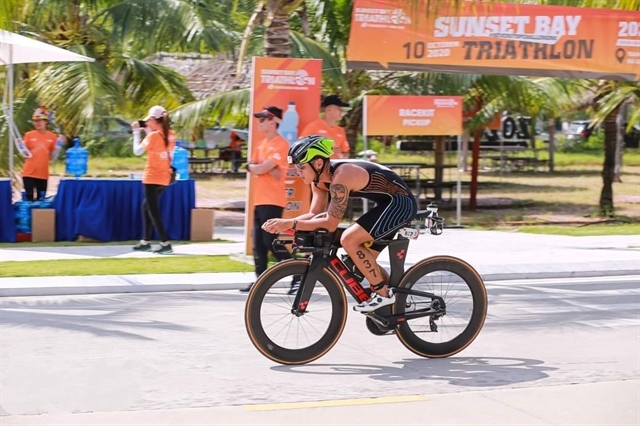 Lam Quang Nhet competes in the cycling segment at the Sunset Bay Triathlon in Quang Ninh Province on October 10.

Born in 1997 in HCM City, Nhat was identified by a coach as having potential in swimming at the age of three.

His journey had begun. At 10 years old, though, Nhat wasn’t getting the results others had expected. His family planned to turn the focus to his studies, but Nhat would have none of that. Swimming was where his abilities lay, he was certain.

His iron will and strong determination showed the makings of a champion.

At his SEA Games debut in 2013, 16-year-old Nhat sent a message to the region in winning the 1.500 metres freestyle in Myanmar.

The baby-faced swimmer became a phenomenon in Vietnam, which had never before had a leading long-distance swimmer. He had come from nowhere to beat veteran competitors from Indonesia, Thailand and Malaysia.

Nhat then received much-needed support to step up to the next level, which helped him defend his title two years later in Singapore, where he also set a Games record of 15:31.03.

Not long after, Nhat retired.

“There were reasons I made the decision to retire, including some conflict between myself and the coaches and also the fact that Hoang was so good in my event. He could dominate that event for a long time,” Nhat told Vietnam News.

“Competing for your country is an honour for anyone. I enjoyed my time wearing the national colours, but the pressure also wore me out.”

Leaving the competition behind, Nhat was coaching for about a year when a friend asked him if he wanted to train for the triathlon, which was becoming popular in Vietnam.

“Why triathlon? Because my passion for sport, especially swimming, still lingered,” the 23-year-old said.

“I saw how extraordinary triathletes were. The triathlon requires not only good technique but also a strong mind. The combination of swimming, cycling, and running broadened my training experience, and competing in triathlons became a new goal in life.

“I had to start from zero, but I’m the kind of person who never gives up, and I really wanted to win and had peaks to reach.”

There were, of course, some challenges to surmount.

“Running is toughest on my body, because running and cycling put a lot of pressure on my back, which resulted in an old injury recurring,” said Nhat, who also faces problems from being short-sighted.

“I have to wear special goggles when swimming,” he explained. “It’s not easy, but it’s a lot more comfortable than the special glasses I wear when cycling. At high speeds my eyes begin to sting and I can’t focus on my rivals.”

In triathlon, Nhat said, athletes must divide their training time equally between all three disciplines. While his swimming prowess sets him up well, he has to work hard on reaching elite status in the other two.

“Training hard is a must,” he said. “And you have to identify new training approaches and find new equipment. Having a high-quality swimming outfit, a good bike, and perfect shoes is like converting a Toyota into a Mercedes.”

Nearly a year after he first began training, Nhat competed in the 2019 Ironman 70.3 Vietnam relay event in Da Nang. The test at the largest national triathlon gave him the confidence to go solo and win the 2019 Sunset Bay Triathlon in Quảng Ninh.

Nhat was then selected in the national team for last year’s SEA Games in the Philippines -- the first time Vietnam had sent a triathlete.

He had returned to the familiar regional competition, but it was all different. Nerves set in at first, because he was facing the best from Indonesia, Thailand, and the host country; athletes who had been competing in triathlons for a decade or more.

A medal proved beyond him, but the experience prepared him for the future.

On October 10, he successfully defended his title at the Sunset Bay Triathlon, setting a personal best time of 2:10.44 along the way.

Coach and teammate Cao Ngoc Ha said the result made Nhat one of the best Vietnamese athletes at the moment, and he definitely has the potential to take gold at next year’s SEA Games.

“I can see it will be difficult to beat the best in the region, even with a year’s training ahead of me,” Nhat said. “But, in 2021, I will focus totally on improving my times.”

He also plans to undergo eye surgery, to make training and competing a little easier.

“My goal is to narrow the gap and turn Vietnam into a country that produces quality triathletes,” Nhat added.