VietNamNet Bridge - Fisherman Le Vi Bi was sitting on a boat to fish squid when a swordfish of about 15 kg jumped from the sea to stab him, making the man fall into the sea.

VietNamNet Bridge - Fisherman Le Vi Bi was sitting on a boat to fish squid when a swordfish of about 15 kg jumped from the sea to stab him, making the man fall into the sea. 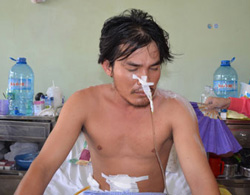 Incidentally, a swordfish weighing about 15 kg jumped from the water and hit Bi’s belly. The victim fell into the ocean. The fish then continued attacking on the right foot of Bi.

The people on board quickly fished out the man and took him to shore for emergency. Bi was transferred from the Tuy Phong District Hospital to the Binh Thuan Provincial Hospital in critical condition.

After consultation, doctors determined that Bi was stabbed from the right pelvic upwards, making an intestinal and peritoneum perforation and he needed urgent surgery.

At present, Bi’s health has stabilized and he is still monitored at the hospital.