VietNamNet Bridge – Vietnamese scientists and engineers have been concentrating their power on the Tam Dao 05 jack-up, a big mechanical work which has an important significance in Vietnam’s science and technology history.

VietNamNet Bridge – Vietnamese scientists and engineers have been concentrating their power on the Tam Dao 05 jack-up, a big mechanical work which has an important significance in Vietnam’s science and technology history. 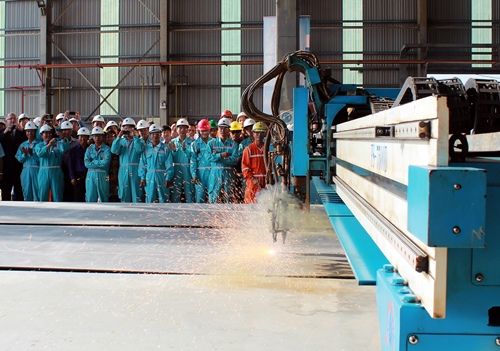 The total investment capital for Tam Dao 05 is over $200 million and it is expected to be completed after 32 months.

After successfully creating Tam Dao 03, the oil rig which is believed to have high quality equal to that manufactured by the US, Singapore and China, PV Shipyard has set to work on a bigger jack-up, Tam Dao 05, made to the order by Vietsovpetro.

Tam Dao 05, with the total tonnage of 18,000 tons, is described by PetroVietnam as the largest mechanical work started in 2013 and the biggest ever steel-structure work, which can only be built with very high technology.

Because of its importance, Tam Dao 05 is listed as a science & technology project at the state level.

According to PV Shipyard, the company’s engineers have to design 800 detailed drawings, the value of which accounts for six percent of the total project’s value.

The scope of operation of the rig are waters with the depth of over 120 meters, or 400 ft. It has the capability to drill in the oil & gas field at a depth of 9 kilometers, or 30,000 ft. It will be a jack-up rig, designed in accordance with Friede and Goldman’s JU-2000E model.

The total investment capital for Tam Dao 05 is over $200 million and it is expected to be completed after 32 months of execution.

One-third of the work of the projects has been completed with the keel laying ceremony for Tam Dao 05.

Tam Dao 05, once it becomes operational, will play a very important role in Vietsovpetro’s exploitation and production activities. It will pave the way for the oil group to make drilling in deeper and more complicated waters in the future.

The jack-up is called the “Vietnamese pride” by local newspapers which commented that Tam Dao 03 and then Tam Dao 05 can show to the world that Vietnamese are successfully upgrading their technologies and abilities to world levels.

Tam Dao 05 will be “strong” because it can resist severe weather and environmental conditions, including high waves of up to 20.7 meters. It will be certified by the ABS (American Bureau of Shipping) and VR (Vietnam Register) before launching.