Tay Ninh's historical and cultural riches waiting to be explored

Noted for the sacred Ba Den (Black Lady) Mountain and the headquarters of the Cao Dai religion, the southeastern province of Tay Ninh has transformed from a once-fierce battleground to an alluring tourist destination awaiting pilgrims and lovers of culture and nature. 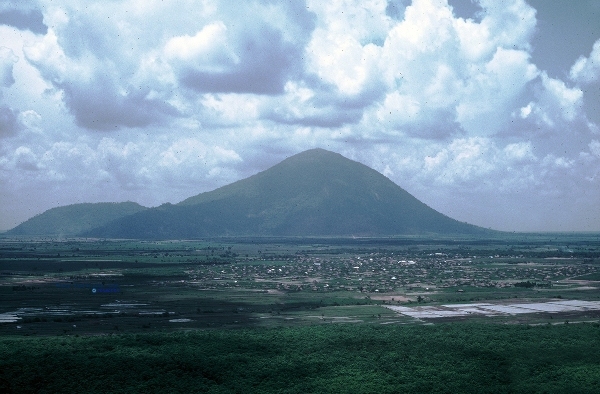 A visit to Tay Ninh, located about 100km from HCM City and 170km from Phnom Penh, Cambodia, can be easily arranged by car, bus or motobike from neighbouring localities in the southeast region.

The 300-year-old Ba (Lady) Temple was built on the mountainside of Ba Den Mountain, a sacred place for Buddhists. It attracts thousands of pilgrims headed for the temple to pray for peace, good fortune and prosperity.

The busiest times of the year for pilgrimages are the first lunar month during the Ba Den Mountain Spring Festival and the 5th to 6th day of the fifth lunar month for Black Lady's birthday anniversary.

“Sitting on the top of the mountain is really a fantastic experience. There’s a great view of the fertile plain and lakes below,” Uyen says. "It is a perfect place to take pictures with spectacular 360-degree views."

Taking a trip on the cable cars to the mountaintop to catch a stunning panoramic view is a great relief from the hotter weather of the city. It takes only six minutes to the Ba Temple and eight minutes to get to the Ba Den mountaintop by cable car. Visitors can also trek on the footpath to the top of the mountain, which takes at least two hours.

Also not to be missed on a visit to Tay Ninh is the Cao Dai Tay Ninh Holy See, 5km away from Tay Ninh Town, the headquarters of the Cao Dai religion known as Caodaism.

The giant, bright temple which was built in 1931 and officially inaugurated in 1955 is the most important shrine for the religion’s four million followers.

It is worth visiting during prayer sessions. The session at noon is most popular with tour groups, according to a local tour guide.

The festivals feature a variety of artistic performances such as the four sacred animal (dragon, kylin, tortoise, phoenix) dances at parades, performances of traditional musical instruments, and Cao Đài vegetarian dishes processed and decorated in a unique way.

The religious events attract hundreds of thousands of pilgrims and tourists at home and abroad every year.

The relic, 60km away from Tay Ninh Town, in the pristine forest is a reminder of days of hardship, incredible bravery and an unbeatable spirit of liberation fighters.

The Central Office for South Vietnam was the "nerve centre" that led the South Vietnam revolution from the first days of the Vietnamese people's resistance war against foreign invasion.

Le Truong Hoang Nam from Vietravel says the relic is included on tours that offer an in-depth look into some of Việt Nam’s most interesting historical sites in the south.

The province shares a 240km border with Cambodia, with two international border checkpoints -- Moc Bai and Xa Mat -- where international tourists can enter.

In the province's Trang Bang District, the traditional craft of making rice paper has been recognised as a National Intangible Cultural Heritage.