Many teachers say they have to ‘struggle’ with the curriculum for first graders, and feel worried about students in upland and disadvantaged areas.

On education forums, one can read the complaints by parents about the difficulty of the curriculum for first graders, which is being used under the new general education program. 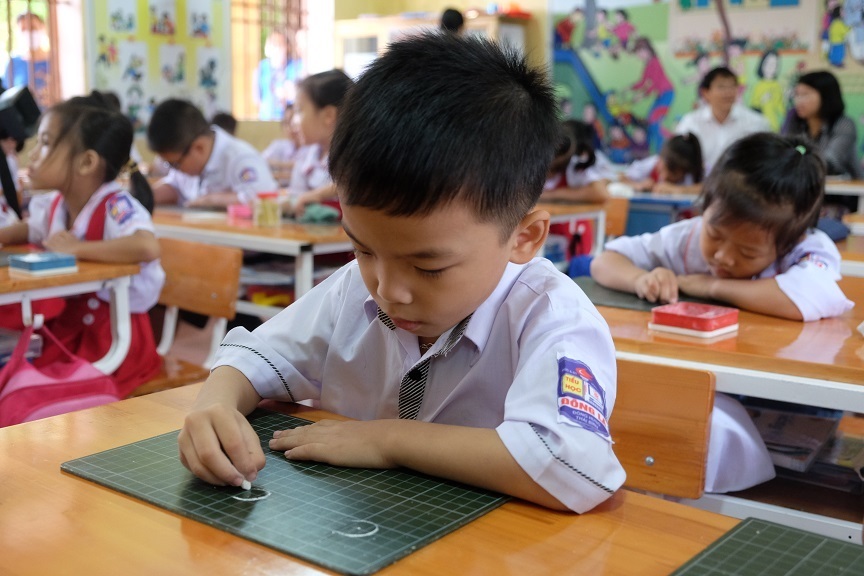 The parents said they find it hard to coach children because the new curriculum is quite heavy for six year old children.

“I find the lessons in Vietnamese language are heavy for my child. But the lessons being provided to students at other schools seem to be even heavier,” said Tran Thi Thanh Tan, a parent in Hanoi (students in different schools use different textbooks, depending on their choices).

Tan said that with such a heavy curriculum, first graders may feel overloaded.

A parent in Quang Ninh province also said the lessons ‘go too fast’. Students have been studying for one month only, but the teacher has begun giving home exercises.

Loan, a parent in HCM City, said the teacher gave a home exercise, asking students to write a long sentence ‘be va chi di cho’ (baby and sister go to the market). She believes that students can’t do this as requested if she had not practiced writing before going to school.

“My child struggled with the writing exercise and it took her 30 minutes to write this sentence on four lines,” she said, adding that the girl made mistakes and used an eraser all the time.

Meanwhile, Do Thu, another parent, complained that her son was asked to write sentences and paragraphs from the second week of study.

Even teachers admitted that the new curriculum is more difficult than the old one.

Nguyen Yen, a primary school in a northern mountainous province, said it is difficult to teach students in the area, where first graders don’t know the alphabet by heart and don’t know how to hold a pen or chalk.

“The new curriculum is too heavy and not suitable to students in remote and mountainous areas,” she concluded.

Thu Trang, a teacher in a large city, said the curriculum is challenging urban students as well.

In order to follow the new curriculum, first graders need to become familiar with letters when they are at preschool.

“The lesson about syllables is too hard. The school time begins at 7 am and the break time is at 9 am, but two periods of studying syllables still cannot be completed,” Trang said.

“Students don’t have enough to time to practice spelling,” she added.