Conclusion 61, issued on December 3, 2009, focuses on a project on improving the role and responsibility of the Vietnam Farmers’ Union (VFU) in the development of agriculture, new-style rural area building and the building of Vietnamese farmer class for 2010-2020. Decision 673 was issued on May 10, 2011, covering the VFU’s direct implementation of and collaboration to run a number of rural socio-economic and cultural development programmes and projects for 2011 – 2020. 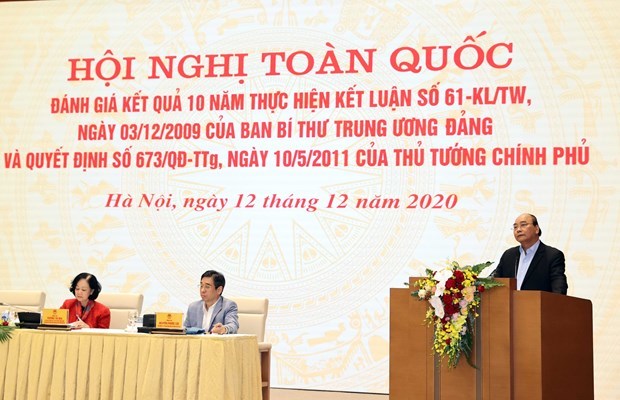 Delivering a report at the event, VFU Chairman Thao Xuan Sung said the two documents have been an important resources for the VFU to effectively orgaise activities for agricultural growth, rural economic restruturing, human resources improvement, new-style rural building, and poverty reduction, and better living standards among others.

The entire nation now has 27,000 farmers’ housholds whose annual incomes exceed 1 billion VND (43,207 USD), with the rural poverty rate deceasing quickly to be under 3 percent this year.

Under Decision 673, the VFU has conducted a project on overhauling the fund for supporting farmers, which received more than 2.64 trillion VND from the government and municipal and provincial authorities. The fund has so far assisted 568,737 housholds in building production and business models.

Vocational training and consultation for farmers, as well as communications campaigns to encourage farmers to engage in new-style rural building were also key activities in the last decade, Sung added.

To date, Vietnam has 5,177 communes or 58,2 percent of its total communes gained the new-style rural building status.

Concluding the function, Prime Minister Nguyen Xuan Phuc said despite natural disasters and diseases, under the Party’s leadership and the Government’s management, the VFU has worked with ministries, sectors and local authorities to build rural infrastruture, boost economic development, protect the environment, and ensure security and farmers’ living standards.

He said with delight that Vietnam’s agricultural export reached over 41 billion USD this year, becoming one of the top nations in ASEAN in terms of farm produce. Vietnam is moving toward a safe agriculture and Vietnamese farmers boat improved knowlegde and skills, he added.

There is a need to have a new generation of farmers who can access advance science and technology and digitial economics, he noted.

He urged the VFU to contunue promoting the key role in agricultural development and new-style rural building in contribution to building modern and sustainable rural area and agricultural sector as well as to helping farmers engage in and benefit more from the nation’s industrialisation and modernisation.

PM Nguyen Xuan Phuc chaired a virtual meeting today between Cabinet members and leaders of 12 cities and provinces that have reported COVID-19 cases over the past three weeks.