After her daughter returned home from the academic year opening ceremony, Mai began learning the first lessons of the Vietnamese language textbook. 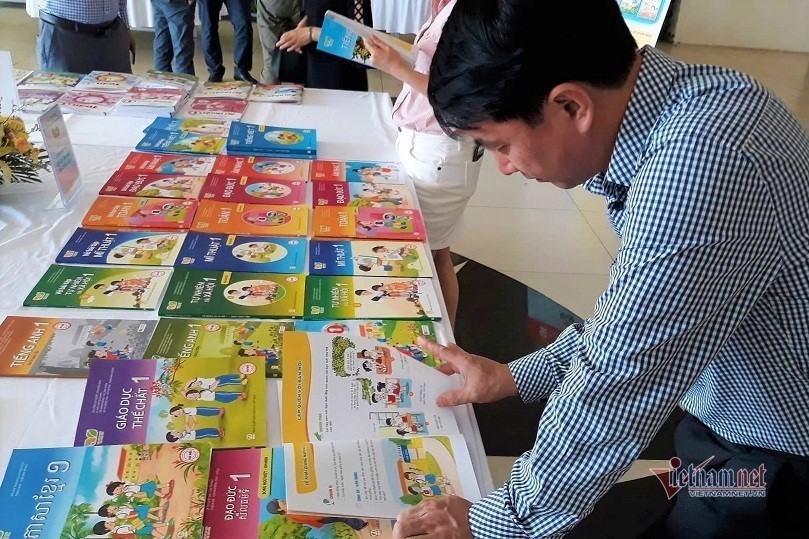 “I could not believe in my eyes. The words were difficult to read,” she said.

Mai was a national excellent student in literature. She has a master’s degree in modern Vietnamese literature and also was a teacher.

Mai was not alone. The Vietnamese language textbook belonging to Canh Dieu set of textbooks for first graders stirred a furor among the public, on social networks and newspapers, raising a debate among researchers, parents and teachers.

The requirement on changing textbooks comes from the application of the new general education program.

Two years after the Ministry of Education and Training (MOET) officially announced the overall program and 27 curricula for subjects, in September 2020, the first lessons of five sets of textbooks for first graders passed through the evaluation round to be used in teaching nationwide.

Long before that moment, textbook compilers and MOET leaders expressed high expectations for the new program and new textbooks.

Minister Nha affirmed that the focus of this general education reform is changing the teaching method, with students at the center, which aims to promote students’ abilities.

He also said that the new textbooks will just be materials for teachers’ reference to change the teaching method and teaching content.

In other words, teachers now can be creative and take initiative in building lesson plans.

Asked about the changes in the new program, Nguyen Minh Thuyet, Chief Editor of the New General Education Program, said the new program selects useful knowledge, and reforms the way of teaching so as to promote students’ abilities and improve their practicing capability.

“The new general education program has to answer the question what students can do after they finish the program,” Thuyet said.

Complaints about textbooks were raised after the new academic year opening day.

The first problem was that parents found it difficult to buy textbooks. The parents who forgot to register with schools to buy books had to struggle to buy books from bookstores.

In Hanoi, the price of a set of textbooks was once 3-5 times higher than the normal price.

In HCM City, Nguyen Minh Nguyet in district 2 managed to buy books for her daughter after traveling 50 kilometers and visiting a lot of bookstores.

Some days later, complaints and criticism about the content of the textbooks for first graders appeared on social networks.

“Students have to study too many things within one lesson”, “lessons go too fast” and ‘we have to struggle every day to help our son read the worlds” were the most common complaints.

A teacher in Nam Dinh, who has 21 years of experience in teaching first graders, also commented that there is a rush in the approach.

Meanwhile, schools this year don’t have a ‘buffer’ week for students to get familiar with classes and lessons before officially beginning the new academic year because of Covid-19.

At the press conference in September 2020, MOET affirmed that the information in Vietnamese language under the new general education program is not more than the previous program. It is now being taught within 420 periods instead of 350.

While textbook compilers and parents were still debating the content of the new textbooks, a lot of problems were found in textbooks, mostly in Canh Dieu textbooks.

The noteworthy thing is that the compilation board of Canh Dieu includes most of the experts of the committee for the new general education program development.

Many lessons faced fierce criticism. Parents complained that it was too difficult for first graders to understand, while the words used in lessons were inappropriate.

Meanwhile, textbook compilers and teachers pointed out the strong points of the textbooks, including the scientific approach in teaching language, and lively images and videos.

However, the good points were unconvincing in the eyes of parents.

Finally, MOET requested to examine the textbooks. And the appraisal council and the compilers of Canh Dieu textbooks agreed to consider suggestions for amendment.

Reform and pressure on the Minister

Nha said it is necessary to learn a lesson from the story about textbooks for first graders. In order to ensure the quality of the textbooks for second graders, he asked authors and publishing houses to pay attention to all stages of the textbook compilation and examination.

MOET will participate in the experiment process. It has requested each department to choose 10 experienced teachers to make suggestions about the content of textbooks.

Nha admitted he feels pressure. However, he said to his colleagues that the education sector must overcome difficulties to meet people’s and the society’s expectations.

To date, the Ministry of Education and Training (MOET) has received applications for three samples of Vietnamese language textbooks for second graders under the new general education program.