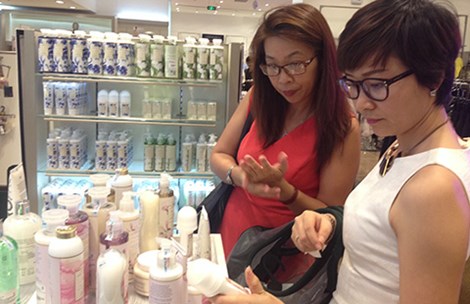 Le Thi Phuong, an office worker, who lives in Tan Phu district, HCM City, said she often goes to Kamanayo, a single-price shop in Aeon Mall to buy things for daily use.

“There is a wide range of things available there, from glasses, spoons to dust bins and baskets. All of them are priced at VND40,000,” she said.

“Some items there have the quoted selling prices higher, and some others have selling prices lower than that in traditional markets. However, VND40,000 is affordable for the majority of housewives in large cities,” she said when asked why she prefers going there.

Le Thi Hong Giang in district 3 said she previously had to buy Marks & Spencer cosmetics from those who returned from Thailand, but now she can find the products easily at Thai invested shops.

A branding expert noted that Thai products can conquer Vietnamese consumers’ hearts because they are positioned as products which “are not too expensive, while have high quality”.

Thai products can penetrate the Vietnamese market because of two major reasons, he noted.

First, they are priced at reasonable levels, which are ‘reasonable’ to middle income earners and ‘acceptable’ to low income earners. Second, they land in Vietnam at a very good moment, when Vietnamese are fed up with low-quality Chinese goods.

However, while Thai products have been welcomed by Vietnamese, they have raised big worries among Vietnamese manufacturers.

Robert Tran, CEO of Robenny Asia Pacific, noted that it is not easy for Thai underwear and cosmetics to penetrate the Vietnamese market, reminding that the 1-dollar single price model failed in some countries such as the US and Canada because shop owners could not reach agreements with suppliers like supermarkets and convenience stores.

Meanwhile, other analysts said that the coverage of Thai products in the Vietnamese market has become large enough to be a threat to Vietnamese manufacturers.

The branding expert noted that though Vietnam is a powerful garment exporter, the Vietnamese market has been flooded with Thai garment products.

He also warned that the domestic market is considered the ‘jumping board’ for exports. Therefore, if Thai products continue dominating the market, Vietnamese manufacturers would meet difficulties in exporting their products.

A representative of Thai Central Group, noting that Vietnam is a potential market for retail chains, has revealed that the group would open six more single-price shops by March 2016.