Vietnamese farmers are harvesting mangosteen, rambutan and pineapple, but a large amount of these fruits are still being imported from Thailand. 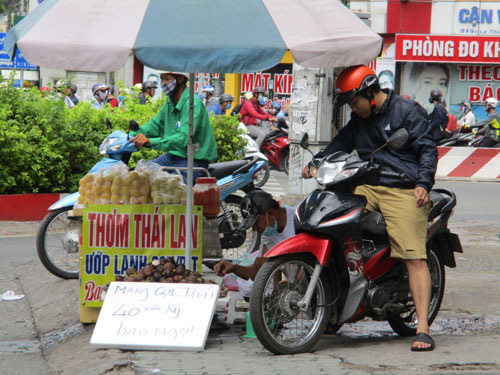 Thailand’s mangosteen, rambutan, tamarind and durian are very popular in Vietnam. Meanwhile, mini pineapples have just appeared and conquered the heart of Vietnamese.

According to the Hoc Mon Farm Produce Wholesale Market Management Company, about 10 tons of Thai fruits are sold at the market each day.

The market’s board of management said about 56 tons of Thai fruits are sold at the market each day.

A member of the board of management said Vietnam’s first-class fruits are tastier than Thailand’s as they are both sweet and sour, while Thai fruits are just sweet. However, Thai products are better in preliminary processing and packaging.

“Petty merchants prefer selling Thai fruits because the fruits are classified well which make it easier to sell them,” he said.

The owner of a fruit import company said Thai fruits are equal in appearance and quality, while they are cheap thanks to the zero percent import tariff and the low transportation cost.

“Vietnam’s fruits are better, but only experienced people can choose good fruits, because the quality of products is unequal,” he explained.

Vo Mai, deputy chair of the Vietnam Gardening Association, noted that Vietnamese consumers like to buy fruits with good appearance because they use the fruits for offerings. Thailand has many good fruit varieties, while products are cheap.

As Vietnam has integrated into the world, it has lifted the import tariff and only maintains the technical barrier to ensure the quality of imports. This has posed challenges for Vietnamese farmers who lack good varieties and organize production on a small scale.

“Vietnamese farmers need to re-organize their production and follow large-scale production to improve the quality and lower the production cost,” Mai said.

According to Le Van Phan, a farmer in Binh Duong province with 60 hectares of orchard land, dubbed ‘Tangerine King’, farmers have had a difficult year in 2020 as exports to China were stuck because of Covid-19. Meanwhile, in the domestic market, Vietnam’s fruits have to compete fiercely with imports. A lot of farmers have reported losses.