The report from the Ministry of Industry and Trade (MOIT) to National Assembly Deputies showed that Vietnam’s automobile industry has been growing rapidly over the last two years. In 2017, Vietnam assembled 258,000 cars and the output of 250,000 products was maintained in 2018. 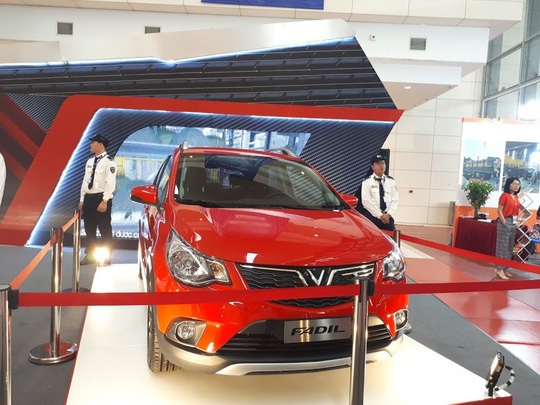 About the achievements of the automobile industry, the report said many products have been exported to Laos, Cambodia, Myanmar and Central America. It has contributed billions of dollars to the state budget and generated 120,000 jobs.

However, the ministry admitted too many problems in the industry, including the low locally made content ratio in products. The plan on raising the localization ratio for car models with less than 9 seats has failed.

Thaco, a Vietnamese owned manufacturer, has a ratio at 15-18 percent, Toyota Vietnam 37 percent for Innova series. Locally made products have low-technology content, such as tires, glass, electric wire, plastic products and batteries.

“If domestic automobile manufacturers cannot find solutions to increase the localization ratio, they won’t be able to compete with regional countries in the context of AFTA,” the ministry warned.

According to MOIT, Vietnam is a latecomer in the region in terms of making cars with up to 9 seats. The automobile production chain is controlled by multi-national groups which determine the R&D, production bases and sale method. Before setting up assembly factories in Vietnam, Japanese and American manufacturers had set up large-scale production projects in other ASEAN countries.

In principle, the manufacturers draw projects based on the demand of the entire region, not only the countries where they set factories in. This explains the manufacturers don’t have large projects in Vietnam, a small market just 1/10 of Thailand, and 1/5 of Indonesia in size.

Regarding support industries, as the Vietnamese market is small, with 300,000 cars a year and 56 producers and assemblers, Vietnam cannot attract investors to the industries.

To develop the automobile industry, MOIT believes that it is necessary to gather strength on the projects of Truong Hai Automobile, Thanh Cong Group and Vinfast. It has also proposed changing the luxury tax policy to help force ‘made-in-Vietnam’ car prices down.

Meanwhile, economists argue that protectionism won’t develop the industry. “The production cost will still be high once the output is low,” an economist said.

Prime Minister Nguyen Xuan Phuc requested that ministries, sectors and localities adjust their policies to speed the development of the automobile and support industries.

VinFast automobiles to be sold in Russia

In addition to other Vingroup subsidiaries entering overseas markets, VinFast is planning to launch in Russia.