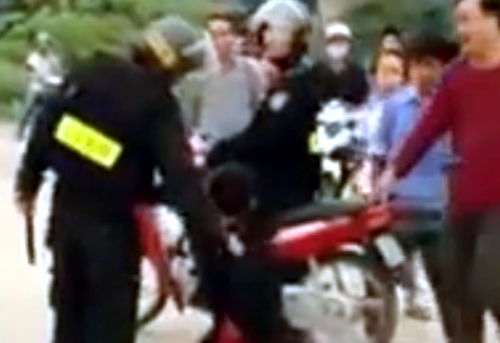 On April 8, a video clip entitled "Thai Nguyen mobile policemen beat traffic violators, force them to kneel" were spread on the Internet.

According to the clip, on the morning of April 7, two mobile police officers of Thai Nguyen province stopped three young guys driving a motorcycle without wearing helmets. In the clip, two young men (in blue and black T-shirts), who did not wear helmets, kneeling in front of the two mobile police officers. Another young man in a blue T-shirt sat on the ground next to them.

The clip appeared on Youtube, with the caption: "On the morning of April 7, 2013, two mobile policemen of Thai Nguyen Province stopped a motorcycle with three guys who did not wear helmets. According to witnesses, the two policemen beat, slapped, grabbed the offenders’ collars and forced them to kneel to apologize. Upon detecting that they were being filmed, a policeman asked the film recorder to delete the clip but he was refused. Being fiercely protested by people, one policeman texted to ask for help from another patrol team."

According to Dang, the policemen stopped the traffic violators for administrative inspection in accordance with the law. Suddenly the violators kneeled. The policemen asked them to stand up but they did not. The policemen had to pull them up.

“The policemen did not beat or force them to kneel. Someone arranged this to film and post the clip on the Internet to discredit the mobile police force,” Dang said.

He said the police of Thai Nguyen are seeking the source of the clip. 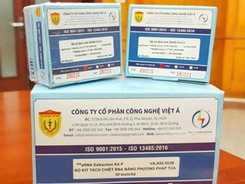