The artist and his muse

In this year marking the 75th anniversary of the August Revolution (August 19, 1945) and National Day (September 2, 1945), activities held in celebration have been noticeably absent due to social distancing. 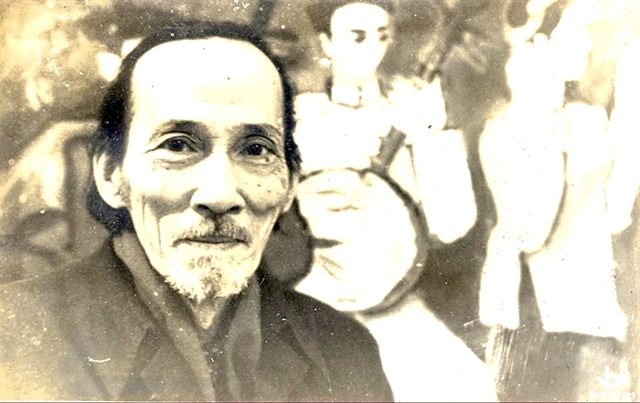 But a variety of individuals and organisations will nonetheless observe Phai’s 100th in their own way, such as artist Van Duong Thanh and the Vietnam News Agency’s The Thao Van Hoa (Sport and Culture) daily.

In life, Phai (1920-1988) was widely admired for his paintings of Hanoi’s ancient streets, collectively known as Pho Phai (Phai Street).

He and college classmates such as Duong Bich Lien and Nguyen Tu Nghiem were popular in the mid-20th century, boasting their own painting styles. Liên was known for paintings of young girls, while Nghiem found fame from works with a cheo (traditional opera) theme.

To commemorate Phai’s birthday on September 1, Thanh plans to showcase Phai’s paintings and her paintings of Phai at her home, with a limited number of attendees.

Also in the pipeline is an exhibition at the Vietnam National Institute of Culture and Art Studies, with about 200 on the guest list, though the pandemic has put that on hold for the time being.

Space considerations mean that not all 100 of her paintings of Phai will be on display at her home. Only 30 of her works are to be hung, as will 20 of Phai’s from her collection.

Thanh was not only one of Phai’s friends but was also his muse, featuring in about 300 portraits all up, some of which found their way into her own collection.

She remembers the first time they crossed paths, feeling fortunate to meet such a well-known artist while still at the Vietnam Fine Arts University.

That was one afternoon in 1967. Her older brother had taken her to his friend’s home, where Phai was also paying a visit.

To his surprise, she greeted him by name, and in turn he asked how she knew who he was.

She told him how she very much liked the illustrations he and the composer of Vietnam’s national anthem Van Cao had published in the Van Nghe (Literature and Arts) newspaper. So much so she had spent some of her savings on buying the edition and putting the cut-out illustrations in her collection.

His touching smile -- that moment -- sealed a friendship that would last for over twenty years.

And since relationships were at the heart of Phai’s artistic practice, many of his works originated in encounters with Thanh. He painted her whether she was modelling for him or not.

“I was always a willing model, enjoying every painting he created regardless of the mood or character he captured or portrayed,” Thanh said. “I understood that I inspired him to express his feelings.”

“I always remember the artist as a teacher, though I was never a student of his. He was known for his oil-on-canvas paintings of Hanoi’s old streets, and was a master of creating refined yet intense colours in works that left an impression on those who saw them.”

One of the portraits he painted of her wearing a red blouse proved to be a fond memory for both artist and model.

Phai and one of his friends visited Thanh’s brother one evening in 1975. He was quickly bored by the political talk that always seemed to dominate any gathering during that turbulent year in Vietnam’s history, and so went to see Thanh to look at her latest paintings instead.

In his dazed, somewhat drunken state, he expressed a desire to paint even though it was well past midnight.

“I brought him colours and a canvas,” she recalled. “He drew quickly. I thought then he was inspired by the red blouse under the moonlight.”

On a 65cm by 55cm canvas, he captured Thanh brushing her hair and the delicate sophistication of womanhood. A painting that perfectly exemplified the swift subtlety with which he could depict the essence of a moment.

Phai was born in the capital, in Van Canh Commune in Kim Hoang Village, Ha Dong District. His village was a cradle of folk paintings of the same name, and he went on to graduate from the Indochina Fine Arts College in 1945.

He was among the last of the students from the college to make a major impact on Vietnam’s fine arts scene.

His first painting of Hanoi streets was Pho Hang Phen (Phen Street) in 1940, before he entered college. It was sent to an exhibition in Tokyo, where it was sold.

Phai actually held two solo exhibitions, but most people only know of one, in December 1984.

That exhibition was held at the Vietnam Fine Arts’ Exhibition House on Ngo Quyen Street. It was seen as a milestone in Vietnamese fine arts, because at the time -- well before Vietnam undertook its process of “renewal” -- individuals were discouraged from holding art or cultural activities, according to art critic Nguyen Quan.

“The opening of the exhibition was a moving experience,” Quan recalled.

“His works were of Hanoi streets, portraits, still lifes, and abstract paintings. His simple, slightly distorted style was not as ‘popular’ as the four ‘main’ themes of artists -- workers, farmers, soldiers, and leaders.”

“But the exhibition went some way to curbing the exclusivity of certain themes and of collectivism. It honoured the individual and recognised an early form of ‘renewal’ in art that was Westernised.”

As for that other exhibition, it was actually his first, held at his home long before 1984 and where he invited friends and colleagues such as Thy Thy Tong Ngoc, Ta Ty, and Nguyen Tien Chung to come and take a look.

On display were about 30 oil-on-canvas and gouache paintings, in nudes and still lifes with themes of youth, nature, and maternity. Collectors Pham Van Ky and Pham Chi Luong were quick to snap some of them up.

“There won’t be another artist like Phai for another hundred years. He was calm and quiet. He never argued or spoke about big topics, but through his paintings we can see his will and his creativity.”

He was posthumously honoured with the Ho Chi Minh Prize in Literature and Arts, in 1996, and won other national fine arts awards, a Hanoi fine arts award, and a Graphic Design award in Leipzig.

He was commemorated last year with a doodle on google.com, on the occasion of his 99th birthday.

In 2008 the Sport & Culture daily and Phai’s family launched an award called Giai Thuong Bui Xuan Phai Vì Tình Yêu Hanoi (the Bui Xuan Phai for The Love of Hanoi Award), which respects and honours those individuals and organisations that leave a mark on society, culture, and the arts in Vietnam’s capital.

Held annually, winners are normally announced at a ceremony in August, which this year is slated for October 10.

For her many paintings of Hanoi streets, she hopes to pick up a nomination for the award next year.