For over 20 years in Vinh Tuong, a farmer has traveled along the Red River to collect antiques. No money to buy a glass cabinet to display the antiques, he attached them to the walls of his house, turning it into a unique masterpiece.

VietNamNet Bridge – For over 20 years in Vinh Tuong (Vinh Phuc province), a farmer has traveled along the Red River to collect antiques. No money to buy a glass cabinet to display the antiques, he attached them to the walls of his house, turning it into a unique masterpiece. 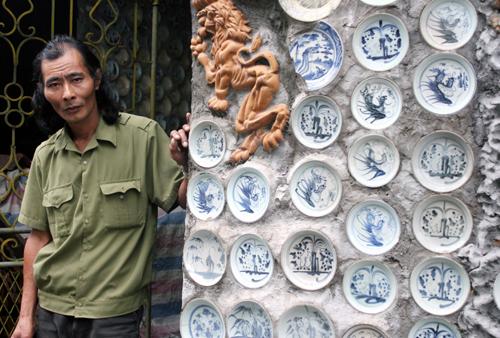 Nguyen Van Truong and his house.

Vinh Phuc has many antique collectors and dealers and one of the most famous collectors is Mr. Nguyen Van Truong in Kieu Son village, Chan Hung commune, Vinh Tuong district.

This man has a limitless passion for porcelain items from ancient times. Commonly, this hobby is only for the rich but Truong is an exception.

As a poor peasant, Truong sold rice and mortgaged his home to the bank to have money for antiques. He also traveled along the Red River to seek old pottery pieces. Truong has never sold any item he collected but attached them to the wall of his house.

Looking from afar, the house is like an ancient imperial palace. The walls are covered with ancient bowls, plates and pottery pieces. On the yard, several dozen of stone mortars stand in line. The dome gate is mounted with vases and plates full of patterns from floral birds to bamboo and stone, apricot flowers, daisies, cranes, pine trees, carps, phoenix, etc.

Stepping through the gate, on the right is a small house that is not mortared but covered by bowls and plates. On the left is a large rockwork paved by thousands of pieces of ancient pottery. The three pillars in front of the house is mounted with old coins and old buttons.

Using his shirt tail to clean a plate on the wall, Truong looked at the whole room, then affectionately called it "picture." He mounted these items on the wall because he did not have money to buy glass cabinets to display them. He was also afraid of losing them and breaking them.

Truong, 52 years old, said that in 1982, he went to Cambodia to perform international duty in the Vietnamese army. In 1986, he returned home and worked as a hired woodwork painter. This job enabled him to meet with many antique collectors. Since then, the passion for collecting pottery antique has invaded him.

"I worked for a famous antiques dealer in the region. There were countless beautiful antiques in his home. He told me that I traveled a lot so if I saw any antique, I could buy and then sell them to him. I was already enamored of antiques, selling antiques is like to sell the cultural values of the nation," Truong recalled.

In 1989, Truong married and had a baby. Life was tough because they had only a few hundreds of square meters of field. As the mainstay in the family but Truong spent most of his earnings into antiques.

"My wife and my neighbors said I was crazy. There was no money for food but collecting antiques," Truong said.

That time, Truong’s house was an old one. Most nights when it rained, he had to keep awake to cover his children and his antiques by palm-leaf raincoats.

This man confessed the truth that he "loves antiques many times more than his wife." Because of that love, he mortgaged his house to borrow money to purchase antiques. His son has just paid the debt recently.

The more he engaged in collecting antiques, the more the passion for old stuff grew. One day Truong quit his job to drive an old motorbike along the Red River to Viet Tri, Lao Cai, Yen Bai ... to hunt antiques.

"The journey to collect antiques was so hard. At noon on scorching days, I alone searched for pieces of pottery and coins on gravel grounds. Besides picking up, I went to remote villages to buy the valuables," he said.

"The biggest difficulty was lacking money. I have never had more than VND1 million ($50) in my pocket. To buy antiques, I had to sell rice or used all of my earnings."

In 1988, the small house was not enough to store antiques. Truong began thinking of attaching them to the fence wall, then on the rockwork and finally on the wall of his house.

After 15 years, Truong attached more than 8,000 plates and bowls, 110 kg of coins, more than 20 kg of brass and stone buttons and countless pottery pieces on his house.

"Now my children have grown up. The money burden has not weighed down on me as before. During the day I hunt for antiques. At night I mount them on the wall. To cover every corner of the house by antiques, it will take about seven years," the old farmer said.

The antique house in Vinh Phuc: 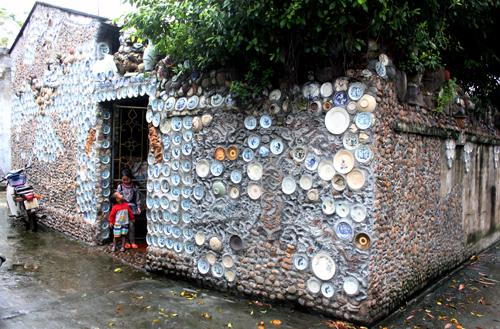 The house is made from more than more than 8,000 plates and bowls, 110 kg of coins, more than 20 kg of brass and stone buttons and countless pottery pieces. 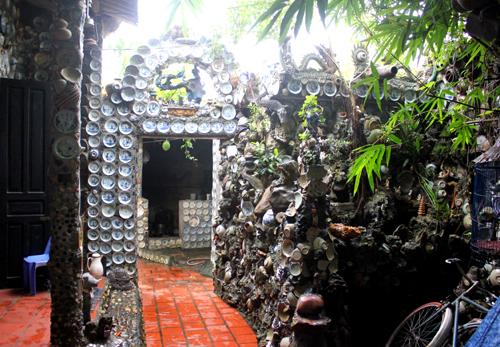 The entrance is the first place Truong attached antiques to. 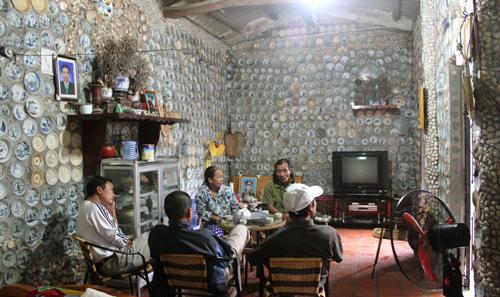 The antiques he collected are mostly dishes from the Le and Nguyen Dynasty. 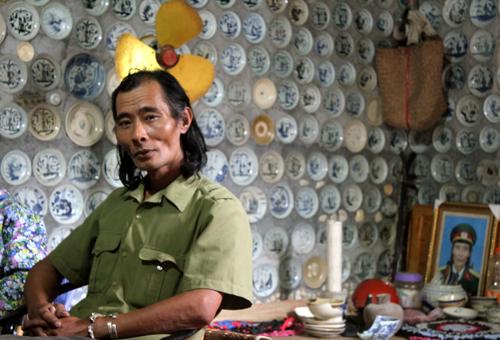 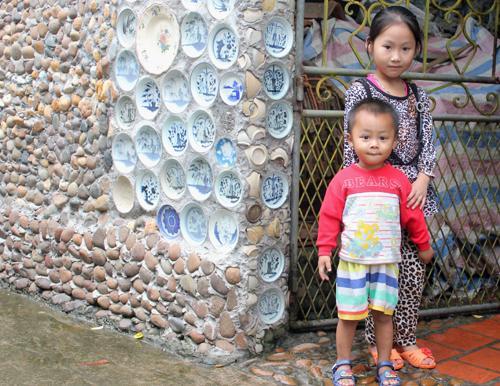 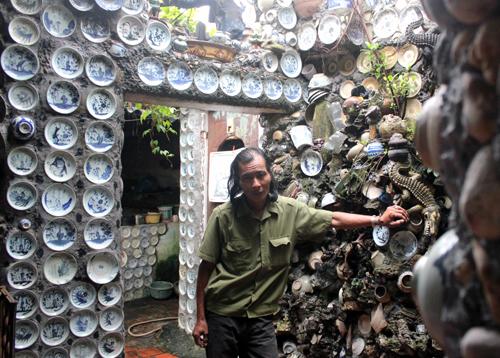 With approximately 8,000 plates, the poor farmer can earn billion VND. 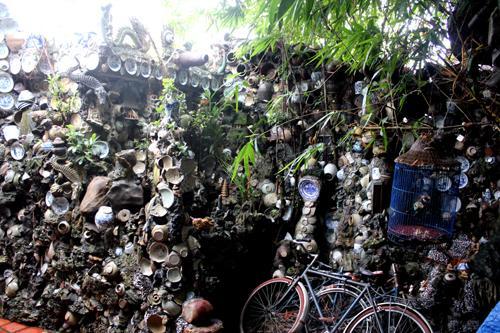 The rockwork covered by pieces of pottery. In addition to the dome entrance in the front, there is another entrance behind the house. Truong spent two years to complete this entrance. He said it would take 7 years to complete the job. Many antique collectors pay visit to this house very often. They admire Truong for his way of collecting antiques. 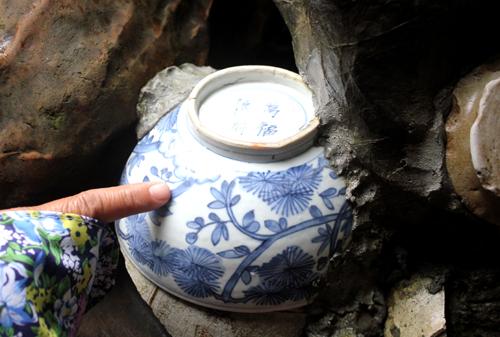 Ms. Dung, an antique collector said the intact plates are not valued as the pieces of pottery on the fence. In the picture is a bowl of the Ming Dynasty, which is priced for $1,000 if it is intact. This broken bowl can be sold for a hundred USD. 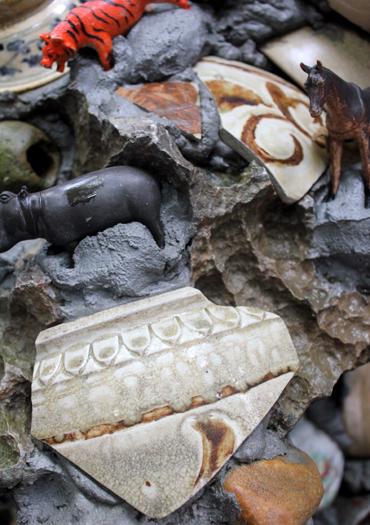 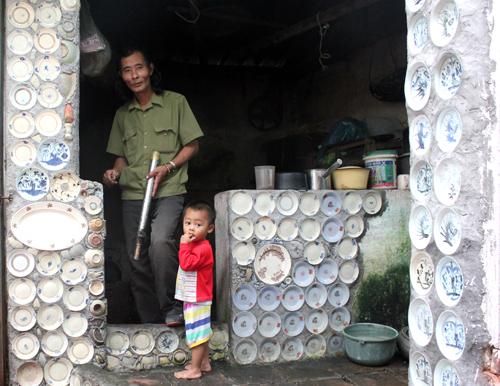 The kitchen is being attached with antiques. Truong said he would mount antiques to the walls of the bathroom and the toilet, too. It is estimated that he needs 7 years to complete his dream house.