The cultural festivals should not be missed in October

In October, cultural festivals will be taking place across the country, from the Kin Lau Khau Mau festival in Lai Chau, Co Le Pagoda festival in Nam Dinh to the Kate festival in Binh Thuan or Dolta festival and cow racing in An Giang.

VietNamNet Bridge – In October, cultural festivals will be taking place across the country, from the Kin Lau Khau Mau festival in Lai Chau, Co Le Pagoda festival in Nam Dinh to the Kate festival in Binh Thuan or Dolta festival and cow racing in An Giang. 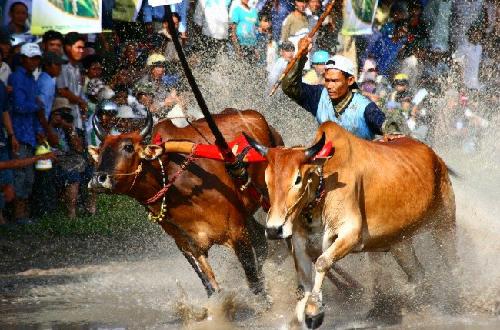 The event is one of the largest annual festivals of the Khmer people, alongside Chol Chnam Thmay (New Year) and Ooc Oom Bok, a festival to thank the Moon for a good harvest.

During the Sene Dolta festival, Khmer people gather together to pay tribute to their ancestors and enjoy traditional songs and dancing after a hard working year.

Doltal is also known as the ancestor worshiping ceremony. It is held every year from 29/8 to 1/9 of the lunar calendar.

The bull racing is part of the ceremonies, with the participation of 38 pairs of oxen. The most famous cow racing is the one in Bay Nui area in the southern province of An Giang. This is a chance for men to show off their braveness and skillfulness. The festival this year will be held from October 3 to 5.

This is the largest, most crowded festival of the Cham people in Ninh Thuan and Binh Thuan provinces, in central Vietnam. The festival commemorates the national heroes, the ancestors, grandparents, gods, King Poklong Garai and King Prome.

This year the Kate festival in Ninh Thuan will take place in three main areas including the Po Ina Nagar temple in Huu Duc-Ninh Phuoc; Po Klaong Garay Tower in Do Vinh of Phan Rang city; Cham Tower and Po Rome Tower in Hau Sanh-Ninh Phuoc on October 3, 4, 5. Meanwhile, the Kate festival in Binh Thuan will take place on October 3 and 4 at the Po Sah Inu Tower in Phan Thiet City.

Keo Pagoda is one of the ancient temples in Vietnam with 400 year old architecture. It is located in Hanh Thien village in Xuan Hong commune, Xuan Truong district of Nam Dinh.

From the 8th to the 16th of the ninth month in lunar calendar every year, the pagoda hosts the festival to celebrate the birthday of the holy saint Khong Lo. In addition to the traditional ceremonies, a traditional boat race with unique rituals will be held. This year the Keo Pagoda festival will take place from October 12 to 20. 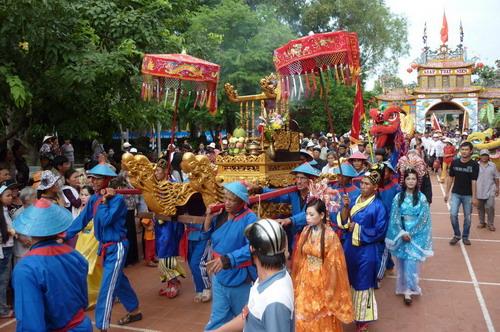 Besides praying for health and happiness for the family and for good business, the festival will have many folk games and folk art events that are very attractive to visitors.

Kin Lau Khau Mau ceremony is also known as Thanksgiving or New Rice Festival, which is usually held on the full moon in September (October 19, 2013) of the Thai people in Muong So commune, Phong Tho district of Lai Chau province.

This is an occasion to give thanks for a bountiful harvest, a chance for the boys and girls to compete and learn about each other as well as for people’s relaxation.

During the festival, an indispensable part is to choose rice to make green rice flakes. In addition, a lot of interesting folk games of Thai people will be held. This is also an opportunity to invite visitors to taste Thai dishes such as rock moss, grilled stream fish, sticky rice...

From October 13 to 20, the pagoda festival will host a festival to commemorate the Holy Saint. This is one of the typical traditional festivals of Nam Dinh province. In addition to the unique rituals and festival, tourists will be impressed with a complex of relics, including the 11-story lotus tower. 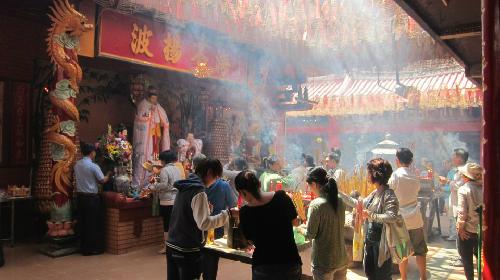 19/2, 19/6 and 19/9 are the three most important birthday of the year for Buddhists all over the world. Each birthday of the Bodhisattva of Mercy has a distinct meaning. On the day October 23 of this year (i.e. 19/9 lunar calendar), the people will flock to the Buddhist temples which have Bodhisattva of Mercy temples to pray for good weather, national peace and happy family.

People offer incense on the birthday of Bodhisattva of Mercy in HCM City. Photo: hochiminhcity.gov.vn

The festival is held annually at the Big House in Long Son commune, Vung Tau city from the night on October 12 to 13.

This is a celebration for peace and to commemorate the merit of Mr. Tran. The ceremony is not held lavish as other festivals but for pilgrims to offer incense and prayer.

In addition, visitors will be impressed with the ancient architectural works and artistic monuments of the Big House and the ancient traditions that have been well preserved and promoted for hundreds of years.

Every year, the Am Pagoda festival takes place on the second day of the ninth month while the festival at Lai Tri communal house lasts from 13th to 15th of the ninth month in lunar calendar. This is a great festival of local people with many exciting activities.