The highs and lows of Hanoi Chairman Nguyen Duc Chung

The hallmarks of the Hanoi Police Director 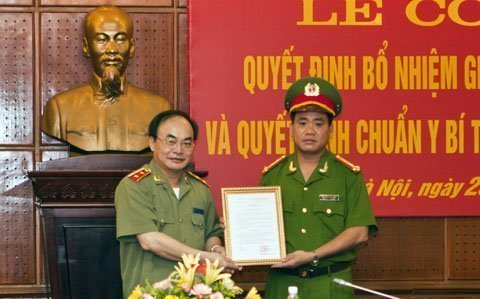 In September 2012, he was appointed the director of the Hanoi Police when holding the rank of colonel. Chung took office as the chair of Hanoi Police Director in 2012-2016, during which he directed the investigation of many cases.

In September 2014, he successfully persuaded the person who took a hostage in Thanh Xuan district.

In November 2011, when he was deputy director of the Hanoi Police, he successfully instructed relevant units to discover the case in which a criminal posed as a doctor to kidnap a newborn at the Central Obstetrics and Gynaecology Hospital.

Leaving the police and the turning point

Chung was elected as Deputy Secretary of the Hanoi Party Committee for the 2015-2020 tenure at the 16th City Party Congress.

At the meeting of the Hanoi People's Council in December 2015, he was elected Chairman of the People's Committee of Hanoi. From there, he officially moved out of the police to assume this new position.

During the 4.5 years in the post of Hanoi’s Mayor, Chung made many statements that stirred up the public.

At a conference discussing the implementation of plans to ensure traffic order, safety and urban order in March 2017, Chung said of 180 pavement beer shops, he was sure that over 150 shops were backed by policemen.

According to director of the Hanoi Finance Department Nguyen Viet Ha, the price of VND10,246 per cubic meter temporarily set by the Song Duong Plant included the VND2,003 per cubic meter the investor used to pay for bank loan interest.

Chung then said Ha was wrong. He said the municipal authorities consulted with the Ministry of Finance, and the price of VND10,246 per cubic meter price was just temporarily identified to serve the investment project design. When the project is completed, they would draw up the balance sheet and set prices exactly.

He affirmed that Hanoi has not spent any money to subsidize Song Duong Plant and will never do this.

In April 2017, a disturbance occurred in Hoanh Hamlet of Dong Tam Commune in My Duc District in April 2017, where some people in Dong Tam illegally kept 38 individuals, who were district cadres and police officers.

Chung visited the Dong Tam Commune People’s Committee’s office to have direct dialogue with locals, recorded the people’s complaints about 21 issues and promised to solve the questions.

On the afternoon of April 22, before 19 officers were released, Chung made three promises to the people of Dong Tam Commune.

First, he promised to set up an inspection team to work on a land plot in dispute and find out which land was for national defence purposes or which was for agriculture.

Second, he promised no criminal prosecution for all the people of Dong Tam commune.

Third, he promised to guide the investigation and clarify the arrest and cause of injuries to Le Dinh Kinh.

On the afternoon of August 27, 2019, the Hanoi People’s Committee and Government Inspectors organized a briefing on the inspectors’ conclusion. Chung affirmed that Kinh made an appeal to put pressure on the authorities in hopes of receiving compensation for the land.

At the time when Covid-19 broke out in many places in the world, at a meeting of the Steering Committee on Fighting Covid-19 on March 23, he said his son was studying in the most Covid-19-stricken area and he told the son to rent a room, store food and stay in the room for three months.

On August 11, Prime Minister Nguyen Xuan Phuc signed Decision No 1223 on the suspension of the Hanoi Chairman. The decision was made to serve the investigation of the official’s involvement in a number of cases.

The duration of the suspension is 90 days, effective from the issuance date of the decision.

Mr. Nguyen Van Suu, Vice Standing Chairman of the Hanoi's People Committee has been appointed to assume responsibilities belonging to the position of the city's chairman in replacement for Nguyen Duc Chung