Even though Vietnam has developed a market for contemporary art, domestic galleries continue to invest in expensive Hong Kong exhibition space to show Vietnamese artworks. Cristina Nualart asks why this is happening and if it’s a good thing.

VietNamNet Bridge - Even though Vietnam has developed a market for contemporary art, domestic galleries continue to invest in expensive Hong Kong exhibition space to show Vietnamese artworks. Cristina Nualart asks why this is happening and if it’s a good thing. 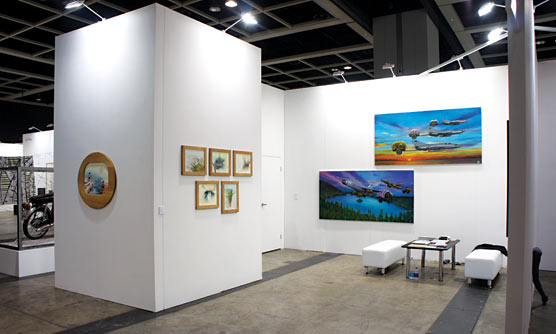 The people at the centre of this weren’t alive when it all started.

For most of the 20th century, no country outside of Vietnam (and a few in the Eastern Bloc) ever saw contemporary Vietnamese art. Despite a rich 70-year-old tradition of painting, much of this art was kept under wraps even in Vietnam, where mistrust and censorship kept things lying low for decades.

In Hanoi, art ‘collectors’ were friends of the artists, who mainly bought artworks to help their painter friends survive.That changed in 1991, when a Hong Kong art gallery, Plum Blossoms, presented Uncorked Soul, a group exhibition of Vietnamese artists. “The exhibition had a startling effect, if not an immediate one,” says Nora Taylor, art historian at the Chicago School of Art. “It took a few years for galleries and museums elsewhere to notice Vietnamese contemporary art.”

But foreign collectors jumped at the opportunity. In the early 1990s, Hong Kong’s yuppies travelled to Hanoi for exotic weekends away. For investment and pleasure, they would buy 10 or 12 Vietnamese paintings at a time, recalls art consultant and erstwhile gallerist Suzanne Lecht.

Suzanne’s life was transformed by Vietnamese art. Graduates from the Hanoi Fine Arts University were the first generation that, from the early 1980s, could choose to paint something other than propaganda art. When Suzanne encountered the art of The Gang of 5 — as five of the university’s graduates called themselves — she was inspired to make their art her mission. With no time to waste, Suzanne moved from Japan to Hanoi in 1993, the same year that Vietnamese art was exhibited internationally for the second time, in Holland.

Plum Blossoms was the first foreign gallery to introduce Vietnamese painters abroad. Over 10 artists from the north, centre and south were chosen for Uncorked Soul. Many of the artists had worked with the first government-owned art gallery in Hanoi, founded in 1965. At that point, not one was known outside Vietnam.

In 1991, the Vietnamese authorities had just lifted the ban on abstract art. At the Plum Blossoms exhibition, abstract paintings shone radiantly in their newfound freedom. Figurative works had transitioned from social realist iconography into more expressive images. New artistic forces were born.

Instrumental to the Uncorked Soul show was the hardback catalogue. It wasn’t just a book to be judged by its stylish cover — one might even say it was the show’s best marketing tool. The text, written by Jeffrey Hantover, enlightened the outside world on how modern Vietnamese painting had evolved. Interviews with the artists and some historical background helped art lovers see the importance of what these artists were looking at. It probably contributed to more than one investment in art, and at high returns, no doubt.

Mekong Delta artist Nguyen Trung, now in his seventies, was one of the artists whose work first made it to Hong Kong. In his 1960s youth, wanting to see French art at its best, Nguyen Trung had tried to escape to Paris. His plan failed the first time, but the painter did get to Paris 30 years later.

Many of the paintings he made in his year in Paris in 1990 were exhibited in Uncorked Soul. In Hong Kong, Trung also had the opportunity to discover powerful artworks by Chinese artists, and this made an impression on his own eager soul.

Other Vietnamese artists were also excited to visit what was then a British territory. In 1997, Suzanne Lecht organised another exhibition in Hong Kong, The Changing Face of Hanoi, taking all five exhibiting artists with her. For most of them, it was their first trip outside of Vietnam. This show was smaller in scale and scope than the exhibition at Plum Blossoms a few years earlier, but it kept Vietnamese art from slipping back into invisibility during the transformative Doi Moi decade.

Vietnam transformed in all directions. A Hong Kong company in 1995 had built the first high rise in Hanoi, the Central Building. Suzanne had assisted the developer, a supporter of Vietnamese art, to procure two large bronze statues by sculptor Le Cong Thanh for the building’s entrance. And Hong Kong investors gave Hanoi something to look up to.

While the Uncorked Soul exhibition was a phenomenal promotion for Vietnamese art, international fairs are the best publicity. The people milling about at art fairs, dealers, collectors, museum curators and general art lovers are the first ones to notice changes and new developments in the art world.

The first Vietnamese gallery to participate in an international art fair was Galerie Quynh. From 2010 to 2012, Quynh Pham had a yearly booth at Art Hong Kong, the original Hong Kong art fair. “In those three years we saw very few Vietnamese visitors,” says Quynh. But she did sell to a small number of Vietnamese from the diaspora, and, of course, to non-Vietnamese. Now in their tenth year of operation, the gallery is working hard in Vietnam to build trust with affluent locals, who are increasingly keen to learn about art.

From the Nineties to the Noughties Vietnam got richer. Not evenly or consistently, but on a high enough level to energise the country with the buying buzz. But expensive handbags are higher up the Vietnamese shopping list than paintings, says Shyevin Sn’g, owner of VinGallery in Ho Chi Minh City. Like most other gallerists based in Vietnam, Shyevin knows that sales will often be better elsewhere. She has done art fairs in Korea, Singapore and, of course, Hong Kong.

Hers was the only Vietnamese art gallery in the luxury Hong Kong hotel that hosted the Asia Contemporary Art Fair in May of this year. At the fair, VinGallery received visits from a few Vietnamese who live in Hong Kong. Shyevin says, “They were very happy to see our gallery there, and came to say hello.” But they didn’t buy. “They think it’s cheaper back home.”

Foreign visitors who were curious about Vietnamese art were surprised to actually see some. Lots of questions were asked, especially about lacquer painting. Sales were made, with Hanoi landscapes making it to the bestseller list.

But an increased profile for Vietnamese art meant VinGallery had competition. A number of Hong Kong galleries who deal in Vietnamese art were also exhibiting.

Craig Thomas knows this from personal experience. His Saigon-based Craig Thomas Gallery, which shows Vietnamese art exclusively and celebrated its fifth anniversary last month, participated in the Affordable Art Fair in Hong Kong this year and will be returning next year. The well-organised fair, he says, attracted a large number of buyers from China.

Decades after his Plum Blossoms success, artist Nguyen Trung’s work is still shipped to Hong Kong. His latest abstract canvases and sculptures were admired mere weeks ago at Art Basel. Cuc Gallery from Hanoi was the only Vietnamese gallery to participate in one of 2014’s most prestigious art fairs worldwide. Asian collectors, savvy about the cultural and historical value of Trung’s work, took out their credit cards.

“Hong Kong is the biggest banking centre in the world. It’s a good market,” says Suzanne Lecht. “Vietnam is a small market.”

She compares the situation to Japan in the 1980s. Rich Japanese would only buy artworks by Matisse or other famous names because their worth would be known.

“It’s the same in Vietnam now,” she says. Like Shyevin, she understands that the shopping priorities of wealthy Vietnamese are geared towards status symbols. The solution to keeping the best Vietnamese art in Vietnam, then, must be to brand Vietnamese art as an object of desire on a global scale.