The man who holds aloft the flag at historic moments

In each historical period, the Vietnamese nation has excellent and outstanding sons, trusted, respected and loved by people. They are the emperors, clearsighted kings and leaders who not only have high talents and vision, and make decisive contributions to the process of promoting the nation’s history of development, but also can gather people together, unite them and become the pilot who guides the nation to weather the storms to exist and develop. 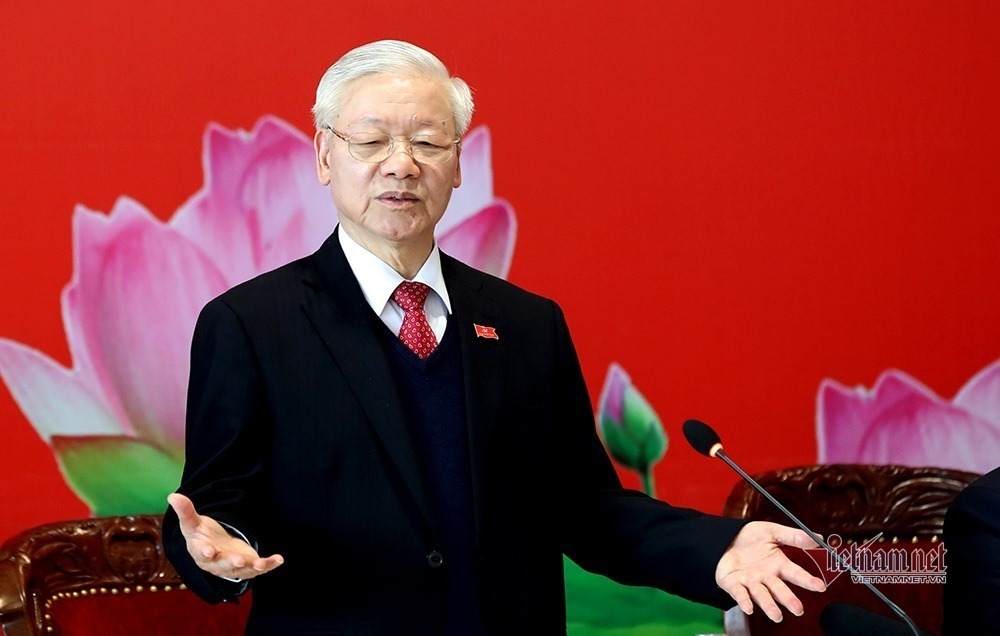 Party Secretary General, State President Nguyen Phu Trong - the  man who raises the flag with an appeal for fight against corruption

In modern history, since the establishment of the Communist Party of Vietnam (February 3, 1930), it is a blessing to our people that we have a great leader, President Ho Chi Minh, who steered the boat of Vietnamese revolution through all the raging waves of times, making a decisive contribution to changing the destiny of more than 20 million Vietnamese people from being slaves to being masters of the country, the society and their lives.

Succeeding the outstanding revolutionary career of President Ho Chi Minh and the Party's senior leaders such as Tran Phu, Nguyen Van Cu, Ha Huy Tap and Hoang Quoc Viet, the personalities such as Le Duan, Truong Chinh, Pham Van Dong and General Vo Nguyen Giap became the most mentioned figures in history in the resistance against the French colonialists and American imperialists in the 20th century, because they were the soul of the leadership that led the Party, the army and people to success in the fight for nation liberalization.

In mid-1980s, Vietnam seemed to be on the brink of a socio-economic crisis, while the world’s communist and worker movement entered a period of serious setbacks. However, the Communist Party of Vietnam, headed by Secretary General Nguyen Van Linh, together with the Politburo and the Party Central Committee, continued to steer the Vietnamese revolutionary boat to overcome all "big waves and strong winds" to gradually lead the nation to the finish safely and victoriously.

However, because of hot development and the loopholes in the economic management mechanism, a not-small part of officials and Party members, especially those with power, colluded with a part of managerial officers in state-owned enterprises to usurp power, and manipulate assets and money of the state and people. Corruption emerged as a burning issue, a threat to the Party's leadership destiny and the regime's survival.

The embezzlement worried the Party and made people anxious. Though we ‘declared war’ with the national evil, the improvement was inconsiderable.

It is not by chance that people will call Party Secretary General and State President Nguyen Phu Trong a ‘great fireman’. This is because he is not only the initiator and commander of the attack to the ‘corruption dens’ at all different levels and in different branches, but he also raises the flag high to call on people to fight against the national evil of corruption, so that the Party is purified, the State is stronger and people’s popularity is calm.

Unlike the battle against foreign invaders, corruption is considered ‘internal invaders’ and the subjects could be comrades, teammates, colleagues, friends or fellow-countrymen of the fighters.

Therefore, in order to defeat corrupt subjects, especially those who have high power and high qualifications, the man who orders the fight against corruption needs to be not only powerful in terms of political position, firm in stuff, steadfast in willpower, and ready to deal with all the tactics and pressure from all sides, but also needs to have all the virtues of "wisdom, courage, humanity, credit, integrity and honesty" as said by President Ho Chi Minh.

It is lucky that exactly at the moment when the fight against corruption needed a leader to raise the flag Party Secretary General and State President Nguyen Phu Trong turned up. He has all the precious virtues – wisdom and courage, and he has trust from the Party, the army and people.

He is elegant, simple and incorruptible as a true communist man with a lifelong heart loyal to the Party, country and people.

It is obvious that the work of building and reorganizing the Party with the focus on correcting the manners, moral and lifestyle of officials and Party members, and the fight against corruption to purify the Party and the state apparatus has gained very important initial achievements.

The achievements are the results of the common efforts made by the entire Party and people, including the merits and the special imprints of the Party Secretary General and State President Nguyen Phu Trong.

Of course, the results are only the first step, and we need to be more drastic and sure to deal with sophisticated and cunning tricks of corrupt subjects. Moreover, it is necessary to set up the mechanisms and policies that make officials dare not and are unable to engage in embezzlement.

We believe that with the outstanding virtues, Trong, who has been reelected as Party Secretary General for the third consecutive tenure, will devote himself entirely to the Party and the people’s revolutionary career, and deserves to be recognized and go down in history as a talented party leader.