The man who survived 25 hours of swimming in the ocean

VietNamNet Bridge – After falling into the sea without water, food, or life jacket, fisherman Tran Minh Sang drifted alone for over a day. During his ordeal, he spotted some 15 cargo vessels and attempted to summon them for help.

VietNamNet Bridge – After falling into the sea without water, food, or life jacket, fisherman Tran Minh Sang drifted alone for over a day. During his ordeal, he spotted some 15 cargo vessels and attempted to summon them for help. 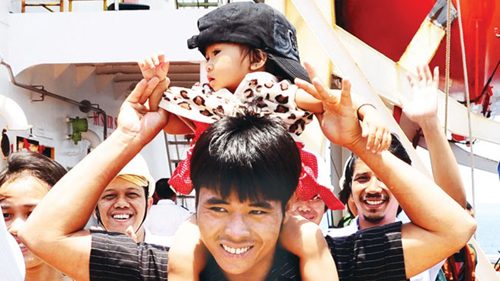 Sang and her son on the day of return.

At noon on April 22, while heading to the toilet at the stern of his vessel, sailor Sang misstepped and plunged into the water. He shouted for help but the roar of the 300hp engine drowned out his cries. After a few minutes, Sang’s fishing boat from the central province of Quang Ngai faded away into the immense waves of the Truong Sa waters.

It was not until an hour later that Sang’s crewmates became aware of his absence. They returned to search for the missing sailor. However, Sang had been pushed by the heavy waves to the Palawan Sea of the Philippines.

Sang was very frightened at first and became resigned to the idea that he would die alone in the sea. He lay flat on his back to float freely, both as a means to conserve energy and to calm himself down. He hoped to be fortunate enough to eventually get hold of a buoy, or anything that might be drifting in the water.

"In my head was the image of my son Nguyen Song Thuong. He is only 15 months old. He is very cute. Every time I go home, he holds my head and rubs my hair. I thought I had to try to live to return home to him," Sang recalls.

It’s customary that, in times of distress, the first thing that Vietnamese fishermen pray for is the help of whales, whom they believe are blessed creatures. Something close to that fairy tale became real for Sang. Says he: "After I prayed for the help of whales, a school of dolphins showed up. They surrounded me and somersaulted on the water. At that time, I believed that I would be saved, and so I calmed down again."

The waters bordering Palawan are home to international maritime routes, so cargo ships pass very often. Sang saw a number of such ships, each time swimming hard to approach them and waving his arms to make himself more visible. He swam after 15 ships  but none spotted him.

Then night fell. One night of drifting in the dark sea began. In the darkness, alone in the sea, Sang felt thirsty and exhausted. Despite knowing it was ill-advised, he took a sip of sea water to have the strength to survive until the next day. "It was an endless night and I nearly went crazy," he says.

Jellyfish swarmed around Sang’s body. Luckily, he did not meet up with any sharks, which usually group in the waters of Palawan.

That night, Sang’s father in Khanh Hoa province received the bad news. Says he: "My son escaped death in 2008 in a big storm. But this time I felt I had to accept that he was dead."

At 8am the next morning, Sang spotted a black cargo ship and tried his best to swim toward it. After an hour, the ship suddenly turned round and picked him up. That was the Lucky Dolphin of the Philippines, which was on its way to China.

A little later, a telegram arrived at the offices of the Quang Ngai port authorities, which surprised everyone: A Vietnamese fisherman had been pulled from the water at 9am on April 23, southwestern of Balabac Island of the Philippines, after drifting for 25 hours at sea. And he was in good health.

When the phone call from the Philippines came, Sang’s father barely heard one sentence: "Daddy, I’m alive”. Then he burst into tears.