The race for state-owned high schools kicks off 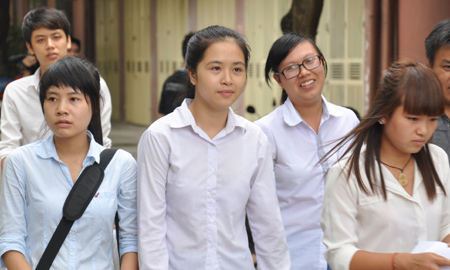 The HCM City Education and Training Department has decided that 61,742 students will be enrolled in state-owned high schools in the 2014-2015 academic year, an increase of 1,320 students over this year.

However, with the high number of secondary school graduates standing at 74,000, about 12,000 students, or 20 percent of the total, will not have the chance to go to state-owned schools.

HCM City’s students can foresee a tough exam awaiting them. All secondary school graduates in 24 districts will have to take the high school entrance exams to be able to enter state-owned high schools.

By contrast, students in some suburban areas did not have to sit for exams last year. They only needed to show the high school their academic records for admission.

Explaining the new decision, Chief Secretariat of the HCM City Education and Training Department, Do Minh Hoang, said this aims to improve the quality of the incoming students for high schools, which has been in decline. In previous years, students neglected their studies because they did not have to take the high school entrance exam.

It is estimated that 65 percent of the 70,000 secondary school graduates will be accepted to enter state-owned high schools, where there will be no more than 41 students in every class.

Many high schools in HCM City have announced their plans to increase the numbers of students to be enrolled this year. Mac Dinh Chi High School, for example, plans to enroll 1,020 students instead of 930. Bui Thi Xuan High School plans to admit 675 (+ 45), and Le Quy Don 480 (+ 30).

However, some parents feel disappointed because the most prestigious schools, including the Tran Dai Nghia High School for the Gifted, Nguyen Thi Minh Khai and Nguyen Thi Dinh Schools are not planning for enrollment increases of any significance.

Meanwhile, Marie Curie High School and Gia Dinh High School have decided to enroll fewer students this year. This means that the competition for these “star” schools will be even more cutthroat.

The paradox is that while state-owned schools are becoming overcrowded, private schools in HCM City, especially the newly established ones, cannot enroll enough students. One headmaster admitted that he dare not increase the enrolment targets this year for fear of failure.

In principle, the students failing the entrance exam to state-owned high schools can go to vocational schools or continuing education centers. However, most Vietnamese students prefer to continue their studies at private high schools, despite the higher tuition fees.