The State President is exemplary, asserts position as Head of State 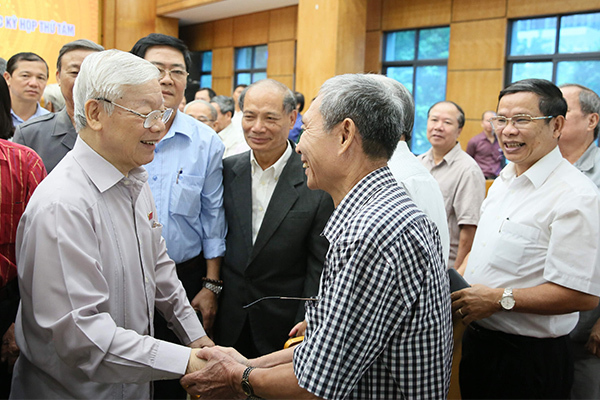 At the opening ceremony of the last session of the 14th National Assembly (NA), President Nguyen Phu Trong presented the work report for the 2016-2021 tenure of the State President.

In 2018, Mr. Trong, the Party Committee Secretary General, took office as State President. He has been fully and effectively performing his tasks and powers in accordance with the provisions of the Constitution and the laws, and taking responsibility before the Party, State, NA and people.

In work and all activities, Mr. Trong has been making every effort to be responsible, exemplary, simple, close to people and wholeheartedly serving the fatherland and people, asserting the position of the Party’s highest leader, the head of the State, who acts on behalf of the Socialist Republic of Vietnam in domestic and foreign affairs.

During the time when his health was not in good condition, the President applied measures to keep activities uninterrupted, such as decentralizing vice president duties or authorizing agencies to join forces to run routine operations.

Even when rapid-fire difficult work came, including Covid-19 and the floods in the central region, especially during the 13th Party Congress period, when he had to deal with many works in personnel and documents, he still managed to run everything smoothly.

The works implemented by the State President and Vice President during the tenure have, together with the entire Party, people and army, contributed to promoting traditional patriotism, the will and strength of great national solidarity, and strengthening the building and rectification of the Party and the political system to make it clean and strong.

Reviewing the results of the work in 2016-2021, Mr. Trong said from the beginning of the term to now, the prevention and fight against corruption, wrongdoing and wastefulness continues to be drastically implemented under the motto: "No restricted areas, no exceptions", which has posed great deterrence and warnings.

Corruption and wrongdoing have been step by step restrained. A lot of complicated embezzlement and economic cases have been discovered and investigated, put into prosecution and judged strictly, which has been applauded, highly appreciated and supported by people.

Regarding the implementation of duties and powers related to the legislative field, the President signed the orders to announce 72 laws and two ordinances ratified by the 14th NA and its Standing Committee, and instructed the State President Office to cooperate with relevant agencies to soon bring legal documents to life.

As the 14th NA’s Deputies, the President and the Vice President attended NA’s sessions, participated in the activities of NA deputy delegations at their electoral units and meetings with voters before and after each NA session.

The President always keeps the close link with the Government. During the tenure, the Party Secretary General and President four times attended and delivered speed at offline and online conferences of the Government with local authorities.

In his capacity as head of the Central Judicial Reform Steering Committee, the State President has instructed judicial agencies to promote judicial and administrative reform; improve the quality of investigation, prosecution, adjudication and enforcement of judgments, especially big economic and corruption cases; so as not to be injustice and omit criminals, and to reclaim the State’s properties.

Mr. Trong said the process of considering the application for the death penalty remission is a matter related to human life and the strictness and clearness of the law, so all the applications are considered with extreme caution.

In the capacity as Chairman of the National Defense and Security Council, Commander of the People's Armed Forces, the State President presided over and directed the meetings of the Politburo, the Central Military Commission and the Central Public Security Commission.

The President worked with the Ministry of National Defense and the Ministry of Public Security on continuing to lead and instruct to implement effectively the 11th Party Central Committee's 8th meeting Resolution on the strategy to protect the fatherland in the new situation, implement the Party’s resolutions, instructions on ensuring national defense and security, building an all-people defense associated with people's security, and building a solid defense area.

The State President stressed that Vietnam must not let unexpected national defence and security problems from countries, far and near, big and small, occur.

Vietnam’s position and prestige continue to be enhanced in the international arena when Vietnam fulfilled role as AIPA (ASEAN Inter-Parliamentary Assembly) and ASEAN Chair in 2020 and a non-permanent member of the United Nations Security Council for the 2020-2021 term.