Returning from a volunteer trip with a rhino rescue team in South Africa, Thao gave up her plan for the course and gave her first talk about the wildlife world to more than 100 spectators aged 20-40 in June. What made her change her plan? 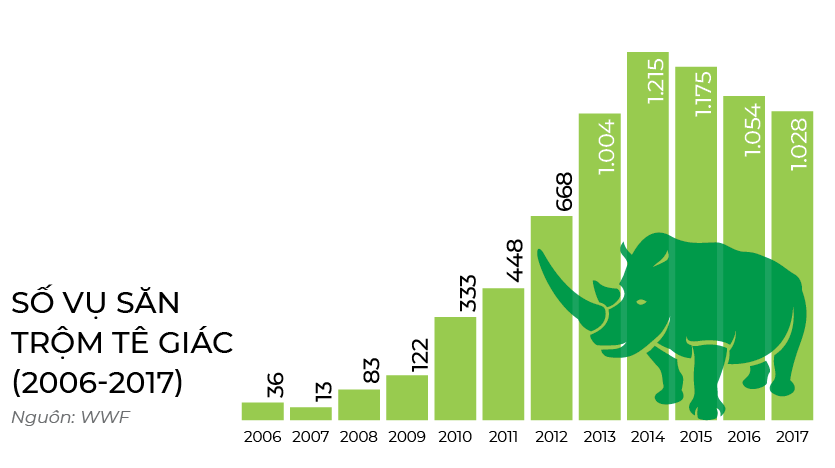 What kind of animals are you most interested in?

I had to go to natural sanctuaries to do research and support the operation there. I saw many different animals, but rhinos were one of my biggest concern. Because of human greed, ruthlessness and lack of knowledge, rhinos are in danger.

There in my workplace were small rhinos which lost mothers because of illegal poaching. Among the rhinos which received our care was Arthur, who was found next to its mother’s dead body.

Arthur was only half of the size of its friends of the same age because he had spent too much energy to recover from injuries incurred when attacking illegal poachers trying to saw the mothers’ horns.

Every rhino receives specific treatment depending on their health conditions and are released to the wild when they fully recover.

What caused you to turn your attention to nature?

Since childhood, I have had special feelings for animals. I studied interior design. But when I participated in volunteer activities, I had more opportunities to learn more about nature in the wild and I decided to study zoology and conservation in the UK.

According to WWF, since 1970, people have cleared out 60 percent of animals, birds, fish and reptiles. Scientific and technical progress has helped people increase the number of domestic animals, but has reduced the natural world.

Nature has been threatened by the lack of people’s awareness. People, for example, think shark fins are very nutritious, but in fact, this is part of a marine creature which contains a high amount of mercury.

Is your job dangerous?

More than 1,000 forest rangers have been killed over the last 10 years, equal to 1/7 of total rhinos killed during the same time in Africa. When I show the pictures taken with forest rangers in Kruger, their faces must be blurred, or their families will be in danger.

In 2014, a person I knew was killed while taking a taxi from the airport. He was the founder of the anti-elephant poaching organization.

A 22-month old boy in HCM City suffered poisoning after being given rhino horn powder to reduce his fever.

Two baby rhinos, a male and a female, were born this month in the care of Vinpearl Safari Phu Quoc in Kien Giang Province.