There is “protection” for rhino horn smuggling into Vietnam

VietNamNet Bridge – That is the comment by TRAFFIC on the sale and use of rhino horns in Vietnam today.

VietNamNet Bridge – That is the comment by TRAFFIC on the sale and use of rhino horns in Vietnam today. 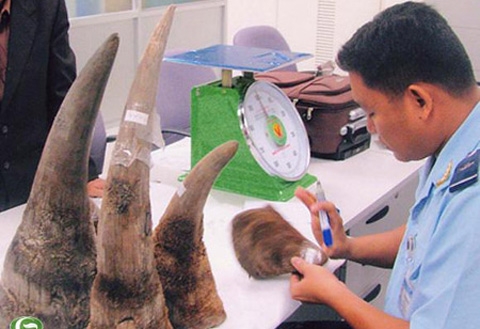 But in fact, only 170 horns were in the import list in Vietnam. Thus, about 74 percent of rhino horns were illegally brought into Vietnam.

According to TRAFFIC, rhino horns are brought into Vietnam mainly through air routes linking Johannesburg with Hanoi, Ho Chi Minh City, Hong Kong, Bangkok... and then transported by road through Laos, Thailand ...

The cause of this situation is due to the huge profits of the trade of rhino horn, with the “protection” of some officials and diplomats of Vietnam.

Naomi argued: "In 2009, Vietnam reported that about 100 kg of rhino horns were seized and from 2004 to 2008 there were at least 10 arrests related to illegal trade of rhino horns in the domestic market but no one was prosecuted."

According to the latest survey by TRAFFIC with 700 people, 78/700 participants who are women said they bought rhino horns to give to their relatives or their bosses. Only 22 men said the same thing. The main subject using rhino horns is entrepreneurs with 36/700 people, followed by the housewife with 14/700 people.

Dr. Naomi said businessmen and women purchase and use rhino horns because they believe in the advertising information that rhino horns can cure diseases, even cancers or enhance the beauty for woman and sexual ability for men.