Nearly 100,000 unsafe motorbike helmets have been swapped for those of standard quality in two exchange campaigns launched by the National Traffic Safety Committee.

Nearly 100,000 unsafe motorbike helmets have been swapped for those of standard quality in two exchange campaigns launched by the National Traffic Safety Committee.

Helmet change to begin in HCM City this May 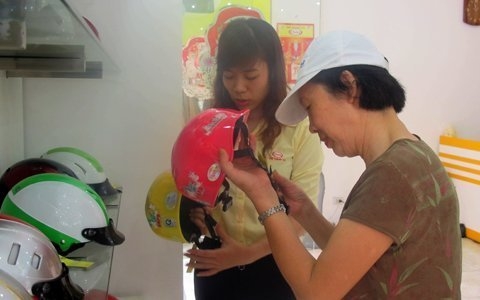 The first three-day programme, launched last month, led to the exchange of about 45,000 substandard helmets.

The two-month second campaign, starting on April 6, is being carried out in Ha Noi, HCM City, Hai Phong City and Thai Binh Province.

Nguyen Huy Hoang, a student from Ha Noi-based University of Technology said he bought a qualified helmet for VND100,000.

"The price is good. The programme is very helpful, particularly for students like us. We can now afford safe helmets to protect us," he said.

Before that Hoang used to wear an egshell-thin helmet he bought in Kim Lien street for VND40,000 ($1.9).

"It is undeniable that fake helmets are fashionable with their many designs and light weight. However, the Government's stricter regulations prompted us to put safety first," she said.

Substandard or fake helmets exchanged by users will be destroyed.

At a meeting on Tuesday to review helmet replacement, Deputy Prime Minister Ngyen Xuan Phuc urged the Ministry of Trade and Industry for stricter supervision and control over helmet qualitiy.