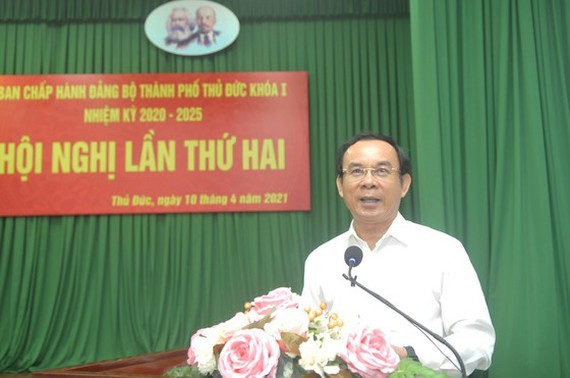 The statement was made by Secretary of HCMC Party Committee Nguyen Van Nen at the 2nd Congress of Thu Duc City’s Party Committee for the 2020-2025 tenure that was held on April 10.

He noted that the city especially concentrates in the planning, management of planning and land use management. In addition, Thu Duc should plan human resource training programs and employee development activities to attract young talents.

Developing Thu Duc City into the leading area of economic growth based on science and technology and turning it into a digital and clean city with the development of social Infrastructure is also HCMC’s mission, he stressed.

Thu Duc is the first city using the city-within-city model in the country. It needs a suitable management mechanism and to be granted the higher level of authority than districts, said Vice Chairman of HCMC People's Committee, Vo Van Hoan said at the meeting.

Secretary of the Party Committee of Thu Duc City, Nguyen Van Hieu noted that implementing the Resolution No. 26-NQ/TU on building Thu Thiem New Urban Area before 2030 of the municipal Party Organization and discussing about the solution of guidance on solving complaints and other issues in Thu Duc City are some of the important task of the city in coming time.

Speaking at the meeting, Chairman of the People’s Committee of Thu Duc City Hoang Tung added the total State budget collection of the city in the first quarter of this year was estimated at VND 2,172 billion (US$94.16 million), fulfilling 26 percent of the yearly estimate. 100 percent of document files have been completed and returned to individuals and organizations on time.

The city has currently carried out 10 main projects and plans to complete investment procedures of seven others. The People’s Committee of Thu Duc City will solve existing problems in projects of the High-tech park, Thu Thiem New Urban Area, the urban development project in Long Binh Ward and Vietnam National University-HCMC.