To become state officers, relations with “officials” a must, survey

VietNamNet Bridge - Results from a large sociological survey showed that many people thought that having the relationship with officials is an important factor when applying for a job in the public sector.

VietNamNet Bridge - Results from a large sociological survey showed that many people thought that having the relationship with officials is an important factor when applying for a job in the public sector. 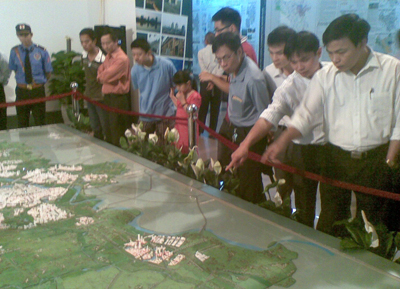 Nearly 80 percent of people did not know anything about land use plans in the place where they live.

A report on the Provincial Governance and Public Administration Performance Index (PAPI) in 2012 was released in the central city of Da Nang on July 2.

The report, compiled by the National Assembly’s Institute of Legislative Studies and the United Nations Development Programme, analyses the operations of local authorities, providing a useful and reliable reference for voters to cast votes of confidence on officials elected or approved by people’s councils.

The report is the outcome of a 2012 survey of 14,000 people. It was the first time PAPI conducted a poll across the country’s all localities.

As a nationwide sociological survey, from 2010 to 2012, the investigation team interviewed 32,500 people about six contents: participation of the people at the grassroots level, the openness and transparency; accountability to citizens, control of corruption, administrative procedures and the provision of public services.

In the central region and central highlands, Quang Binh was highly appreciated by people in most contents, but it still needs to improve "control of corruption." Da Nang is also in the leading group, but its weaknesses is "people's participation at the grassroots level" and "transparency."

Tay Ninh province ranked low in 2011 and 2012 but it scored higher points for "administrative procedures." Khanh Hoa ranked bottom but local residents appreciated it for "supply of public services."

PAPI report shows that nearly 80 percent of people did not know anything about land use plans in the place where they live; 17 percent knew thanks to the government's announcement and 3 percent knew it through other sources. Lack of transparency in the land use planning is the cause of harassment in land management.

According to the report, nearly 50 percent of respondents said the relationship with officials is an important factor when applying for a job in the public sector, such as the positions of office worker, policeman of communes and wards, land administration officer, teachers of public primary schools and judicial officials.

Petty corruption and bribery are the problems in many areas and it tends to increase as people apply for a job in the public sector, health care in the district hospital or apply for land use right certificates.

People opt for not denouncing because the price for whistleblowing may be high or they did not believe that the legal system on anti-corruption can protect them. The provinces that control corruption poorly are Dien Bien, Khanh Hoa, Lai Chau, Ninh Thuan and Cao Bang.