To enter a ‘star’ school, students have to run ‘5-year marathon’

Students must get perfect score of 10/10 for nearly all exams during the five years at primary school to be eligible to apply for the entrance exam to the Hanoi-Amsterdam School for the Gifted. Only one 9/10 score will be allowed.

The management board of the school has announced it will select students for sixth grade by considering both students’ learning records at primary school and results of the school entrance exam. 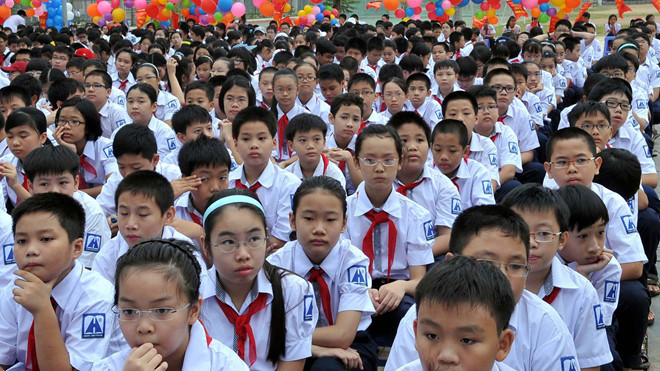 The Hanoi-Amsterdam School for the Gifted is the most desired school in the city. The number of students who want to enroll is very high and students have to compete fiercely for seats.

The Hanoi Education Department once prohibited organizing entrance exams to select the best students for the school, saying that such an exam would be tough for students just finishing primary education. Students were selected based on their records at primary schools.

However, the school will resume the entrance exam in 2019 after several years of interruption allowed by the education department. Students will have to take three tests and those who get the highest scores will be admitted to the school.

Prior to that, students were shortlisted based on their learning records at primary school. Students had to get at least a 39 score for four year-end tests in math and Vietnamese language in first and second grades, 20 score for two year-end tests in third grade, and 10/10 for every test in math, Vietnamese language, science, and history and geography when they were in fourth and fifth grades.

A parent told VietNamNet that his son began preparing for the entrance exam when the boy entered the first grade. However, he is still not eligible because of a 9/10 score he got when he was in third grade.

“I think the requirements set by the school are unreasonable,” he said. “You should not say for sure that those who get the 10 score are better than those with the 9/10 score.”

Some parents have also complained on education forums that their children failed to apply for the entrance exam though they were just 0.5 score short of meeting the requirement.

One of the parents commented that with the shortlisting policy, the school will miss a high number of students with good learning capability.

Entrance to high schools for the gifted heats up

Should Vietnam increase the number of schools for the gifted?