Too old motorbikes to be banned from circulation

Under a draft plan by the Ministry of Transport, the owners of the motorbikes would be fined if they cannot show the certificates on meeting emission standards.

VietNamNet Bridge – Under a draft plan by the Ministry of Transport, the owners of the motorbikes would be fined if they cannot show the certificates on meeting emission standards. Meanwhile, the too old motorbikes would be prohibited to be brought into circulation. 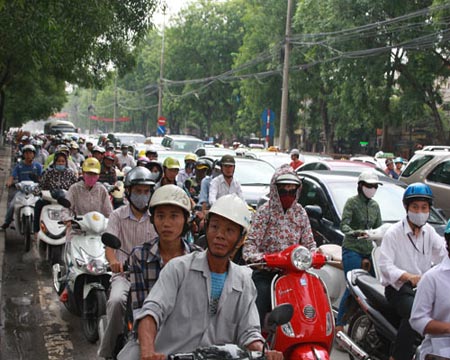 The Vietnam Register announced on November 22 that the old motorbikes which cannot satisfy the environment standards would be forced to leave abandoned.

The agency’s Head--Trinh Ngoc Giao said the draft legal document on controlling motorbike emission has been submitted by the Ministry of Transport to the Prime Minister.

However, the existence of too many motorbikes and the lack of strict control over the means of transport has caused serious traffic accidents and air pollutions.

At present, both imports and domestically made motorbike products must go through the tests in terms of quality, technique safety and emission standards right from the very beginning. However, no further verification is made after the motorbikes are put into operation.

According to the Ministry of Transport, in other countries in the world, drastic measures have been applied to weed out old motorbikes from circulation.

“In European countries, China, Thailand, India, Japan and Singapore, the governments have applied administrative orders and economic encouragement in order to eliminate old motorbikes which are believed to be unsafe to users and cause environment pollution,” Giao said.

However, the official has admitted that it would be very difficult to verify old motorbikes in Vietnam. Therefore, the Vietnam Register has suggested that the verification would depend on the duration of vehicles in circulation.

The vehicles which have been in circulation for no more than five years would be free from emission verification.

Meanwhile, the verification and stamping for certification would be conducted every year.

In the immediate time, the emission verification on motorbikes would be carried out in the five central cities, namely Hanoi, HCM City, Hai Phong, Da Nang and Can Tho.

Also according to Giao, in the long term, motorbikes would have to undergo the verification in emission, but they would also need technical safety testing. The motorbikes which cannot meet standards must have their problems fixed and put for re-inspecting.

However, Giao admitted that it would be impossible to conduct the technical safety testing in the immediate time, saying that the plan needs to be undertaken step by step.

Since the testing equipment still cannot be made domestically, the Vietnam Register would have to import the equipment to allocate to the register agencies in the five big cities.

After the plan gets the nod from the government, the Ministry of Transport plans to discuss with five motorbike manufacturers on mobilizing their 500 authorized agents nationwide for emission tests.

The plan by the Ministry of Transport has raised big worries among the poor people. Nguyen Khanh Toan, Deputy Secretary General of the Vietnam Automobile Transport Association, said the emission control to ease the environment pollution is a necessary work, but it needs to be carried out following a reasonable roadmap.

“Currently, a lot of people are still very poor, and they still have to earn their living on too old motorbikes,” Toan said. If their motorbikes cannot be put into circulation, they would become jobless.