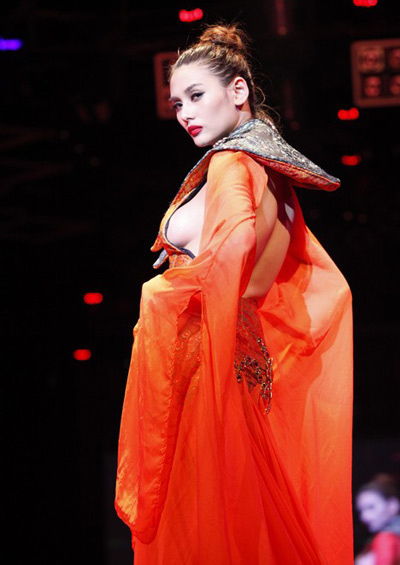 The Deputy Director of HCM City Department of Culture, Sports and Tourism, Do Hoang Nam, said that several costumes performed in the "Passion and Convergence" show, including the design introduced by Hoang Yen, were not presented in the rehearsal show for censorship.

In this uncensored outfit, the model revealed her full breasts when she turned on the catwalk.
This is not the first time this 24-year-old supermodel was criticized for wearing scanty costumes on the stage.

Nam said Yen’s revealing incident is very clear and she would be penalized. The penalty will be announced after the department’s meeting with related parties.

According to Nam, for the artists who have several times criticized for wearing scanty clothes or violating the rules on performing art will receive the most severe penalty: banning from performing activities.

Hoang Yen said: "A couple of times before and this time, I have been reminded about the offensive costumes but these incidents happened unintentionally. I would like to apologize to everyone about the unfortunate things."

The model said she did not know that the outfit was not censored yet. It is a design by Phan Tam. 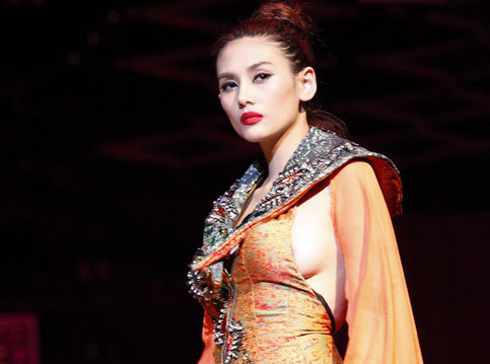 "When I was asked to wear that gown, I felt wrong and a bit nervous. Yet, the organizers told me to wear it to dance and beat the drum. I opposed this because the gown is very revealing under arms. If I danced and beat the drum, it would have been more revealing. So, I just walked normally and tried to be carefully but unfortunately it still exposed the chest," the model explained.