The Ministry of Transport has suspended two depugy general directors of the Vietnam Railway Corporation to verify claims that an executive of the Japan Transportation Consultants Inc. bribed  Vietnamese transport officials with $800,000.

VietNamNet Bridge - The Ministry of Transport will suspend two deputy  general directors of the Vietnam Railway Corporation from work to verify claims that an executive of the Japan Transportation Consultants, Inc. (JTC) bribed Vietnamese transport officials with 80 million Japanese yen ($800,000) in return for an ODA project. 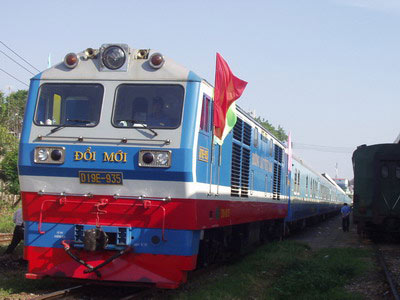 The information was disclosed by the corporation's chair - Mr. Tran Ngoc Thanh today.

Yesterday, the director of the management board of railway projects was also suspended.

At a meeting on Sunday, March 23, the Minister of Transport Dinh La Thang, Mr. Tran Ngoc Thanh, President of the Vietnam Railway Corporation, said the corporation had asked the concerned officials to explain.

The Director of the Railway Project Management Board – Mr. Nguyen Van Hieu was suspended for 15 days to focus on explaining and providing documentation for the investigation.

The corporation will also establish an inspection team, led by the Director General to review all procedures related to railway projects.

"We will examine seriously. All relevant staff must explain," Thanh said.

Minister Dinh La Thang said that the information about the bribes that Japanese media reported was very serious and it should be made clear very quickly to report to the Prime Minister.

Thang also said that the Transport Ministry would coordinate closely with the Japan International Cooperation Agency (JICA) and the Embassy of Japan in Vietnam to coordinate and share information to clarify the case.

Today, March 24, the Ministry of Transport will report to the Prime Minister, the Ministry of Public Security, the Central Committee of Internal Affairs and the Government Inspectorate about the case.

"All officials involved must be suspended to explain about the case, including retired officials and those who are no longer related to railway projects. Anyone who is detected to commit corruption will be severely punished," emphasized Minister Thang.

Also on March 23, the Ministry of Transport established an inspection team to inspect all projects that have the participation of the JTC contractor, stopped and checked the disbursement procedures for the remaining ODA amount, stopped the negotiation for Giap Bat-Ngoc Hoi section of the Hanoi urban railway project.

Tamio Kakinuma confessed to the alleged bribes during questioning by the special investigation squad of the Tokyo District Public Prosecutors Office.

JTC has won several infrastructure construction projects in Vietnam. In 2005, it teamed up with the Pacific Consultants International (PCI) and the Japan Railway Technical Service (JARTS) in a consortium of contractors to provide services for the Hanoi-HCM City railway route project.

Under the contract, the consortium conducted a feasibility study and technical design, supervised project implementation, and supported VNR in improving its infrastructure management capacity. It cost nearly VND150 billion and took 56 months to complete.