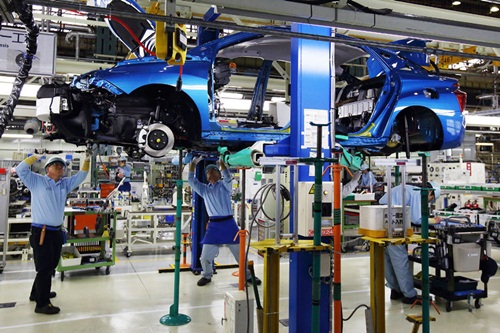 Japanese newspaper Mainichi has quoted reliable sources as reporting that Vietnam, the US and Canada have built roadmaps on removing the tariffs on Japanese car imports, under which the tariff removal would be completed within 10-20 years.

The other eight countries participating in the negotiations for TPP, Australia, Brunei, Chile, Mexico, New Zealand, Peru and Singapore, are also drawing up plans to cut tariffs on Japan's main export item.

Vietnamese Deputy Minister of Industry and Trade Tran Quoc Khanh, who is also chair of the Vietnamese negotiation delegation for TPP, has confirmed with VnExpress that the removal of the tariff on Japanese cars is an important matter of the negotiations, but no agreement has been reached.

Khanh declined to make comments about the information reported by Mainichi.

According to the General Department of Customs (GDC), Vietnam imported 55,400 cars under the mode of complete built units (CBUs) in the first six months of the year, a two-fold increase compared to the same period last year.

However, importers say the direct imports from Japan were modest. Japanese products are mostly luxury brands which can be made only in Japan. The other products, though bearing Japanese brands, come from third countries such as Thailand and the US where the production costs are lower.

Also according to Mainichi, as eight countries have built roadmaps for reducing tariffs on Japanese car imports, the Japanese negotiation delegation now pays particular interest in three remaining countries – the US, Vietnam and Canada.

The US now taxes 2.5 percent on Japanese car imports and 25 percent on trucks. Canada taxes 6.1 percent, while Vietnam imposes a high tax rate of up to 70 percent.

As for Japanese automobile manufacturers, the import tariff cuts to be made by TPP member countries are believed to help them save tens of billions of yen every year.
However, the US wants to maintain the taxation as long as possible, reasoning that the sudden removal of the tax will affect the domestic job market.

An analyst noted that there is a common principle applied for TPP negotiations that the maximum time for any tariff cut process is 20 years. Therefore, it is highly possible that the US would require 20 years for the tax cut on Japanese car imports.

Japanese press says Vietnam may accept to cut tariff within 10 years, while Canada plans the same time or slightly longer.