VietNamNet Bridge – Vietnam could see a trade deficit in 2015 after three consecutive years of a surplus, as prices for crude oil, which Vietnam exports, have plummeted.

VietNamNet Bridge – Vietnam could see a trade deficit in 2015 after three consecutive years of a surplus, as prices for crude oil, which Vietnam exports, have plummeted. 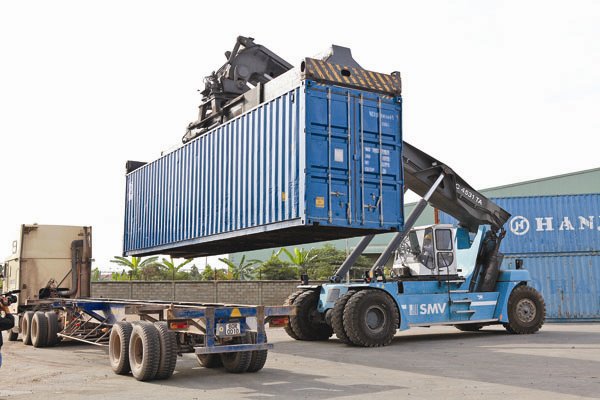 The General Statistics Office (GSO) has reported that Vietnam’s import turnover in January was higher by $500 million than export turnover.

Vietnam exported $12.9 billion worth of products and services in January. The figure, though representing an increase of 9.7 percent over the same period last year, was not high enough to prevent the trade deficit.

Analysts noted that the return of the trade deficit was “foreseeable” and that the crude oil price decrease was an important cause.

While turnover of other key export items have been increasing steadily (the export turnover of electronics and computer components increased by 62.2 percent, cashew nuts by 26.9 percent and footwear by 23.2 percent), crude oil export turnover in January dropped by 36.5 percent.

Meanwhile, Vietnam imported $13.4 billion worth of products in January, a slight decrease compared with December 2014, but a sharp increase of 35.5 percent if compared with the same period in 2014.

Vietnam mostly imported goods from China with import turnover from the market reaching $4.2 billion in January 2015, a sharp rise of 47.1 percent over the same period last year. Import turnover from ASEAN markets reached $2 billion, up by 26.6 percent.

Vietnam has taken measures such as increasing exports, enhancing domestic production to reduce imports from China and diversifying import markets. However, the importation of Chinese goods, especially materials, have continued to rise.

Vietnam's exports to China have grown by an average of $800 million every year in the last three years while imports have expanded by $3 billion to $3.5 billion every year.

Dr. Vo Tri Thanh, deputy head of the Central Institute of Economic Management (CIEM), said that Vietnam’s trade balance with other countries would change in 2015 following a great year of trade surplus in 2014.

Thus, it is highly possible that the trade deficit would return to Vietnam after three consecutive years of trade surplus.

“First, the crude oil price falls will affect the country’s export turnover. Second, the oil prices will prompt Vietnamese enterprises, which have been reliant on foreign-supplied material sources, to increase imports to use for local production,” Thanh said.

“The crude oil price fall plus the higher demand for imports both will lead to a trade deficit,” Thanh explained.

The Ministry of Industry and Trade (MOIT) at a conference held in late 2014 also predicted that the trade deficit could return in 2015 and the excess of imports over exports may reach a new record-high of $8 billion, or 5 percent of export turnover.

The projected rise in the trade deficit is attributed to a significant economic recovery expected in 2015. As Vietnamese enterprises are believed to be receiving more orders, they would have to import more materials for domestic production.