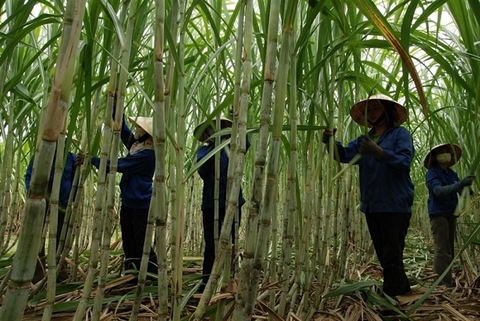 Tariff reductions for imported sugar to Viet Nam under the ATIGA have created difficulties for domestic sugarcane production. — Photo congthuong.vn

Nguyen Van Loc, general secretary of the Viet Nam Sugarcane Association, said that in 2020, Viet Nam began to reduce the import tariff to 5 per cent on sugar from ASEAN according to the ASEAN Trade in Goods Agreement (ATIGA). This has seen a rapid increase in sugar imported from Thailand.

The sugar imported from Thailand with a large volume and low price has affected the domestic sugar production industry.

This imported sugar volume has completely dominated the local market and forced the price of local sugar to drop to a low level.

The low price has forced farmers to reduce sugarcane cultivation and to switch to other crops, leading to a reduction in sugarcane growing area.

Meanwhile, a high sugar inventory due to the lower sugar price has put factories at risk of stopping operation.

Accordingly, Viet Nam's sugar industry is in danger of being wiped out.

About 3,300 workers have lost their jobs and 93,225 farming households have been affected due to difficulties in the domestic sugar industry.

Therefore, six sugar factories represented by the association have filed a request to apply anti-dumping and anti-subsidy measures to cane sugar products from Thailand.

After a thorough investigation, the Ministry of Industry and Trade on June 15, 2021 imposed the anti-dumping duty of 42.99 per cent and the anti-subsidy duty of 4.65 per cent on cane sugar originating from Thailand.

The application of trade remedies has seen sugar imported from Thailand decrease by 75 per cent.

This slows down the unfair competition of Thai sugar for the domestic industry, thereby helping to increase the price of locally produced sugar.

The purchase price of sugarcane from farmers has also increased from VND100,000 to 200,000 per tonne.

This is an effective solution to gradually restore the raw material areas and reduce pressure on the domestic sugarcane businesses.

Loc said that the trade remedies had reduced unfair competition of Thai sugar with local sugar products, thereby helping to increase the price of domestically produced sugarcane, saving a series of sugarcane factories and stabilising sugarcane production for farmers.

“Since the decision to apply the trade remedies on Thai sugar, the local sugarcane companies have determined that it is the time for them to restore production. Therefore, Son Duong Sugar and Sugarcane JSC has continued investment policies and increase the purchasing price of sugarcane for farmers," said Nguyen Hong Minh, general director of the Son Duong Sugar and Sugarcane JSC.

"The higher purchasing price has left the farmers rest assured in restoring the raw material areas. Now, if the market is stable, the sugar factories will recover and develop production in the next 3-4 years."

However, there are signs of tax evasion, anti-dumping and anti-subsidy in other ASEAN countries other than Thailand, Minh said.

Therefore, the company proposes the State to apply trade remedies for sugar from ASEAN countries.

Chu Thang Trung, deputy director of the Trade Remedies Department, said that sugar production industry was one of the industries having regional and global market integration, so the industry knows that there are trade remedies that can be applied to protect the legitimate interests of the manufacturing industry.

Trung said that in the context of liberalisation and globalisation, more countries were reducing tariffs, especially when participating in free trade agreements.

That reduces import taxes on many items and even completely eliminate them, creating more and more competition between imported goods and domestically produced goods.

“The application of trade remedies is to ensure a fair competitive environment between imports and domestically produced goods. For the domestic sugar processing companies and industry themselves, they need to improve their competitiveness to compete with imported goods," said Trung.

According to Trung, up to now, Viet Nam has conducted trade remedy investigations for 25 cases in total, including 15 anti-dumping cases, six self-defence cases, one anti subsidies case and two tax evasion cases.

Among them, most cases were for metal products such as steel and steel products. There is also a number of cases related to wood, sugar and some other items.