The Ministry of Public Security has devised a plan on inspecting drivers and handling traffic violations concerning "drunk vehicle drivers found having drugs in body and alcohol concentration". 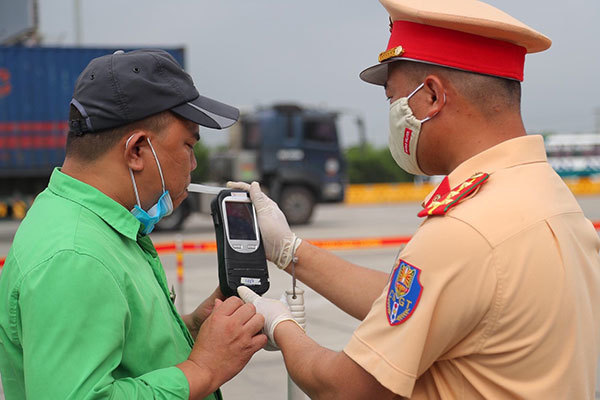 The inspections will be conducted from March 15 to the end of March 31, 2021, with the focus on main traffic routes in urban areas, major highways, key national highways, cargo and tourist transportation routes, the routes where traffic accidents frequently occur; the areas near the departure points, bus stations, harbors, warehouses, bars, discotheque halls, restaurants, and areas with complex security and drug problems.

The Ministry of Home Affairs has asked traffic police units to set up task forces to implement the plan based on their actual situation in terms of staff and means.

Traffic police units on duty must be equipped with sufficient means and technical instruments, including alcohol concentration measurement machine and drug testing equipment that meets standards. They are required to use cameras provided to them, especially mini cameras to record activities during the duties.

If vehicle drivers oppose the officers on duty and commit other violations, policemen need to record the actions to serve as a basis for handling violations in accordance with the law.

Policemen are required to take minutes on administrative violations if vehicle drivers do not comply with the requirements of testing alcohol and drug concentrations.

When handling cases of drug use and violation of regulations on alcohol concentration, policemen will have to check the national and police database to discover any recidivism and impose reasonable fines.

Regarding the violations on using drugs, it is necessary to verify identity, make a list of violators and send to agencies, organizations and the People's Committee of the commune where the violators reside or work for handling measures under the Law on Drug Prevention and Control.

Local police directors, considering the real conditions, can mobilize other police forces and medical units to join forces with traffic police to implement the inspection campaign.

More national highways were open to traffic in an effort to reduce traffic congestions in the Mekong Delta.