The National Traffic Safety Commission will coordinate with the Beverage Association to develop a new model of alcoholic beverage selling points that would offer unique services for intoxicated people to ensure traffic safety in big cities.

VietNamNet Bridge – The National Traffic Safety Committee will coordinate with the Vietnam Beverage Association to develop a new model of alcoholic beverage selling points that would offer unique services for intoxicated people in order to ensure traffic safety in the three largest cities in Vietnam - Hanoi, Da Nang, and Ho Chi Minh City. 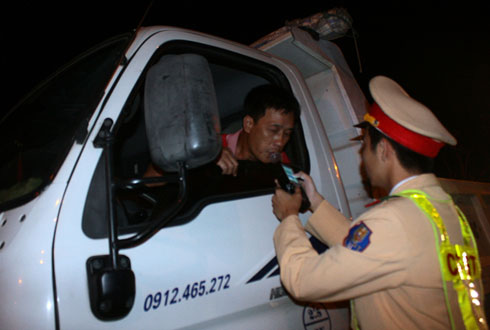 According to the commission’s deputy chair, Khuat Viet Hung, volunteers at these shops will encourage drivers to not drink alcohol and beer. These shops will also supply special services for people who are drunk like overnight parking. Drunk people will be taken home to protect their safety.

According to the National Traffic Safety Commission, to control and handle violations of traffic regulations during the upcoming New Year holidays, the traffic police will launch three patrol campaigns, from Dec. 15 to 31, 2014, Jan. 15-31, 2015 and Feb. 15-28, 2015.

Colonel Nguyen Huu Danh, Deputy Chief of the Road and Railway Police Department, said that the patrols would focus on checking the alcohol concentration of drivers.

The Ministry of Public Security recently held a pilot program on testing alcohol concentration of drivers in eight provinces. The program will be expanded to other localities next year.

The National Traffic Safety Committee has reported significant declines in traffic accidents and fatalities during the 11-month period.

Between January-November, 23,256 cases of traffic accidents occurred nationwide, killing 8,272 people and injuring 22,434 others.

In the past 11 months, the police handled over 4 million road traffic violations, collected fines of more than 2,360 billion VND (112.4 million USD) and revoked over 340,510 driving licenses.

Drunk driving is the cause of up to 70 percent of traffic accidents in Vietnam, the Committee said.

The National Traffic Safety Committee and the life insurance company Prudential Vietnam on December 3 inked a coordination memorandum of understanding on implementing a programme supporting relatives of traffic accident victims.

The National Traffic Safety Committee’s data show that more than 20 people die of traffic accidents in the country every day while nearly 70 others become disabled for their remaining life, leaving their relatives utmost sorrow along with an array of difficulties.

In a bid to deliver the community’s assistance to victims’ relatives, the committee's program includes a number of activities such as granting scholarships to victims’ children, helping their relatives find jobs and funding medical treatment fees.

Prudential Vietnam’s Prudence Foundation is the first to join the the committee’s program.

Accordingly, the foundation is supporting the drive from now to 2019 with scholarships to be granted to dead victims’ children in poor families and free life insurance contracts to poor widowed spouses who are raising under-18 children.

At the MoU signing ceremony, scholarships were granted to 45 school children from Hanoi and eight northern provinces.