At least seven passengers were killed and 25 others were injured after a coach en route from Haiphong to Lao Cai plunged into a canyon on October 25. 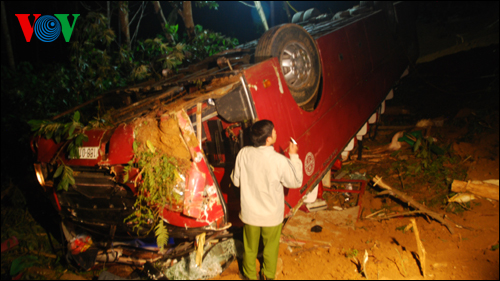 At least seven passengers were killed and 25 others were injured after a coach en route from Haiphong to Lao Cai plunged into a canyon on October 25.

The accident happened at 18.30pm when a coach carrying 53 passengers, mostly Buddhist followers, on a ritual trip to Bao Ha temple in Lao Cai was travelling past Yen Son commune, Bao Yen district.

Rescue workers recovered five dead bodies trapped inside the coach. Two others died at a hospital nearby.

Six of the dead come from Haiphong city, and the remaining one is from Thai Binh province.

The Ministry of Transport asked the Lao Cai provincial Traffic Safety Board to identify the cause of the tragic accident.

Survivors said the accident might have been caused by brake failure.

The two air passengers J.N.A.J, 31, and K.C.G, 24, were said to try every trick in the book to get through customs procedures. They even sprayed packages of heroin with deodorant to neutralize the dogs’ sniffing ability.

The case was transferred to HCM City Police on drug-related crime investigation on October 27.

Since the beginning of 2013 Customs Officers of Tan Son Nhat airport uncovered 9 drug trafficking cases, seizing a total of 23.67kg of drugs and 2,065 methamphetamine tablets.

Vietnam joined more than 50 diplomatic corps and international organizations at the Diplomatic Fair 2013 held in capital Pretoria on October 26.

The event is part of activities to mark the 50th anniversary of the establishment of the African Union.

The charity bazaar offered an opportunity for participating nations to introduce their history, traditional cultures and beautiful landscape.

This was also a chance for African nations to introduce the all-Africa spirit – an important goal pursued by the former Organization of African Unity (OAU) and now the African Union in order to build an Africa of peace, solidarity and unity in diversity.

The Vietnamese pavilion is one of the highlights in the fair. Apart from spring rolls and G7 coffee, visitors were impressed by Vietnamese handicrafts and conical hats.

The fellowships, worth VND200 million each, aim to help the researchers continue their scientific projects, thus contributing to the development of research in Vietnam.

Phuong and Thuy have researched cancer treatments while Thu focused on the application of TiO2 nanoparticles and ZnO in producing bacterial killing films.

The awards were granted by the For Women in Science Programme, launched by the L’Oreal Group and UNESCO in 1998. So far, it has supported more than 1,700 female scientists in 108 countries in the world.

In a dispatch dated October 26, Phuc, who is also the Chairman of the National Traffic Safety Committee (NTSC), requested an increase in the number of on-duty traffic police and mobile patrols, as well as better management of passenger vehicles.

He ordered provinces and cities to raise commuters’ awareness of traffic laws and dangers.

In a latest accident, a passenger coach en route from Haiphong city to Lao Cai province plunged down into a canyon, killing 7 passengers and injuring 25 others.

Survivors said the accident might have been caused by brake failure.

An exhibition opened in the northern province of Thai Nguyen on October 26, aiming to raise the awareness of Vietnamese people, especially the youth, of the nation’s sovereignty over the Hoang Sa and Truong Sa archipelagoes.

The exhibition features 150 maps and various historical documents which were collected by domestic and international researchers and scholars, proving Vietnam has ruled the two groups of East Sea islands for many centuries.

On display are documents in Vietnamese, Chinese and the French language dating from the 17th to the 20th century, along with 95 maps published by Vietnam, several Western countries and China from the 16th century until now.

One section of the exhibition depicts the economic and socio-cultural development of the two archipelagoes in the course of the country’s industrialisation and modernisation.

The exhibition will run until November 4.

The Department of Overseas Labour Management has announced from 2014, medical practitioners and orderlies with Japan Language Proficiency Test (JLPT) certificates N1 or N2.

JLPT certificates will be eligible for selection to work in Japan without having to complete additional Japanese language courses.

Previously, medical practitioners and nurses—even those with JLPT N3 certificates—had to complete a compulsory free 12 month Japanese language course before being authorised to seek overseas employment.

The Ministry of Labour, Invalids, and Social Affairs and Japanese authorities hosted the course.

Medical practitioners with the JLPT N1 or N2 can work and study in Japan for three years.

Nurses with the same qualifications are allowed to stay for four years.

Candidates are also able to sit Japan’s national medical practitioner and nursing exams during their time in the country.

Candidates can apply to the Department of Overseas Labour Management at 41B Ly Thai To Street in Hanoi’s Hoan Kiem district, Hanoi from October 25 to November 20, 2013.

The department will announce applicants who meet their requirements on the website www.dolab.gov.vn.

The Department of Overseas Labour Management is the only agency receiving applications and coordinating with Japanese officials.

The sobering statistics were released at the seventh national scientific tumor seminar in Can Tho City on October 25. Themed “Female Cancer Prevention”, it attracted more than 300 professors and doctors from oncology hospitals and centres throughout the country.

The seminar summarized recent research and treatment achievements that will help raise the rates of treatment success via earlier diagnoses.

According to the World Health Organization (WHO), worldwide cancer sufferers totaled 22.4 million in 2010 and could climb to 300 million in the next 25 years. As many as 200 million patients may die from the disease, mostly in developing countries.

The biennial seminar was created to collect cancer prevention experience and collate the shared knowledge in a manner that can improve the effectiveness of future national anti-cancer programmes.

A seminar will be held on November 18 to collect advice from local authorities of 13 provinces and cities in the region as well as experts on the Mekong Delta Plan in response to climate change for sustainable development in the time to come.

A preparatory meeting for the seminar was held in the southern city of Can Tho on October 24, drawing the participation of scientists from the Can Tho University, Dutch experts and representatives from the World Wide Fund for Nature (WWF).

Martijn Van De Groep, on behalf of the Dutch experts, said they have received advice from local people and experts from PhuQuoc Island and Ho Chi Minh City but there are still many different ideas on the plan.

The experts want to collect public ideas for the last time before submitting the plan to Deputy Prime Minister Hoang TrungHai in the framework of the Vietnam-Netherlands joint commission meeting in mid-December, he added.

Addressing the meeting, Standing Deputy Director of the Southwestern Region Steering Committee Nguyen PhongQuang spoke highly of the contributions by the Dutch experts to building the plan.

The plan is very important since it will help provinces in the Mekong Delta region to effectively cope with climate change and work together for sustainable development in the coming time, he noted.