Trains may have to stop running because of unreasonable policy

The Vietnam Railways Corporation (VNR) may have to stop running trains because of the lack of a policy to allocate money for train maintenance.

“If there is no money to maintain ordinary activities, there will be no other choice than stopping the trains in March,” Vu Anh Minh, chair of VNR. 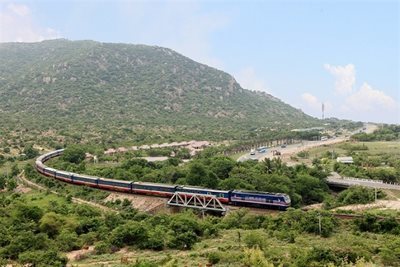 The problem was put forward at the working session between the Prime Minister’s taskforce and the State Capital Management Committee (SCMC) held on February 20 in Hanoi.

Minh said that VNR has reported its problems to the Ministry of Transport, SCMC and the Prime Minister and asked to settle the problems that determine the fate of VNR. However, the problems have not been resolved.

The transport ministry allocates budget for VNR’s maintenance activities prior to December 31 every year. VNR then will sign contracts with its 20 subsidiaries and assign the companies to implement maintenance duties.

“However, to date, VNR still hasn’t received the budget,” Minh said at the working session, adding that the possibility of having to stop trains is high.

Nine state-owned economic groups and 21 general corporations were transferred from ministries to SCMC two years ago under a Prime Minister’s decision.

From that moment, SCMC represented the state’s ownership in enterprises. Ministries were no longer the governing bodies of the enterprises.

Before the transfer was carried out, economists warned that the new governing body, SCMC, will have to manage VND5,000 trillion worth of the state’s capital. The enterprises are all leading ones in their fields, with large operation scale and investment projects.

In late 2019, the first problem arose. SCMC asked to assign the Ministry of Transport (MOT) and Ministry of Industry and Trade (MOIT) – the previous governing bodies of VEC (the Vietnam Expressway Corporation) and EVN (Electricity of Vietnam) – to approve projects to be invested by the corporations.

The current laws on investment and the use of state capital in enterprises does not mention the SCMC model. The approval of investment plans must be made by the National Assembly, the government, or provincial authorities.

Meanwhile, the approval of investment projects must be made by the enterprises’ board of management.

On February 17, the Prime Minister requested MOT and SCMC to consider the proposal to transfer VNR back from SCMC to MOT.

Regarding the allocation of budget to VNR to carry out maintenance activities, MOT cannot do this any longer because the Law on State Budget stipulates that the ministry can only assign budgets and order the enterprises belonging to the ministry. VNR is no longer an enterprise of the ministry.

The Hanoi Railway Transport Joint Stock Company has reduced train ticket prices for the sleeper class by between 7 and 30 per cent.