On his debut at the Southeast Asian Games arena last year, 16-year-old Tran Hung Nguyen stunned everyone by overcoming many tough competitors to seize two gold medals and break one record.

In fact, the name ‘Tran Hung Nguyen’ is not so new to domestic swimming circles, as he once struck his peers and experts with a sparkling collection of 18 golds, one silver and one bronze at the 2018 Southeast Asian Age Group Championships. However, the young swimmer from the Army team was relatively unknown at the SEA Games arena. That explained why Nguyen could not avoid feelings of anxiety and pressure on his debut in the region’s largest sporting event in 2019.

“Despite having competed in many international youth tournaments, I had to struggle to prevent people from seeing my legs tremble on the starting podium of the 200m medley qualification. Not to mention, for fear of failing to reach the finals, I used all my power to swim in the preliminary round. Now reminiscing back on that moment, I still feel so funny,” Nguyen recalled.

The Vietnamese athlete finished the men’s 200m medley qualifiers in second place with a time of 2:05.47, only behind an Indonesian competitor (2:05.07). However, in the final round, Nguyen took everyone by surprise as he finished the race first clocking a time of 2:02.56, thus clinching the first SEA Games gold medal of his career.

At that very moment, many Vietnamese journalists asked each other: “Who is this boy?”, while proceeding to quickly feel surprised and excited to discover that Nguyen is a student of former swimming athlete Truong Ngoc Tuan (Army team). That evening, talking with the author on the phone, Tuan could not hide his joy and pride he holds for his young apprentice: “17 years ago I could only manage to achieve a silver medal in the 200m backstroke event at the 22nd SEA Games, but now my student clinched two gold medals. I couldn’t be happier.”

After the 200m medley glory, Nguyen went on to make Vietnamese swimming proud by sweeping his second SEA Games title in the 400m medley discipline. More impressively, his time of 4:20.65 clocked by Nguyen broke the previous record (4:22.12) held by fellow countryman Nguyen Huu Kim Son at the 29th SEA Games in 2017. In addition, the 16-year-old boy contributed significantly to Vietnam’s two bronze medals in the men’s 4x100m medley relay and 4x100m freestyle events. 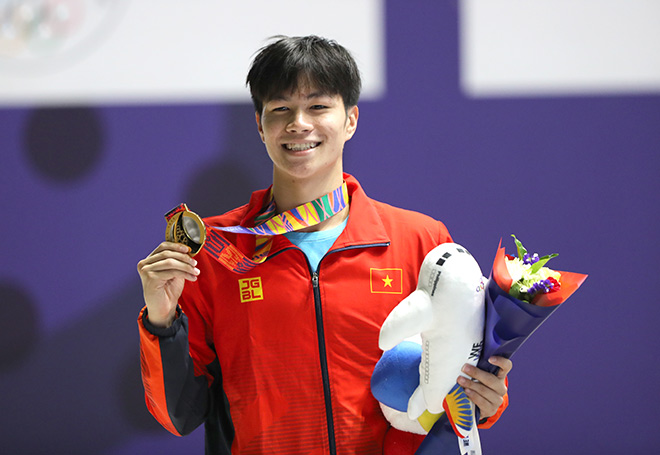 Despite coming from the same hometown of Quang Binh as his talented senior Nguyen Huy Hoang, Nguyen didn’t live near any rivers during his childhood, and nor could he swim until he took up swimming by chance. It dates back to August 2013 when Quach Thi Dung attended a

memorial service in her husband’s hometown in Quang Binh and accidentally met the then 10-year-old Tran Hung Nguyen. With her professional eyes, Dung realised Nguyen’s talent and called her son Truong Ngoc Tuan, the former swimming athlete and now the deputy director and coach of the Defence Sport Training Centre 5 to promptly recruit such a “raw pearl” to the Army swimming team.

After three years of training under the instructions of previously well-known swimmer Truong Ngoc Tuan, the little boy Tran Hung Nguyen attracted experts’ attention and was selected to the Vietnam national team when he was just 13. Given such a precious opportunity, Nguyen immediately showed his talent becoming the Southeast Asian champion in the 400m and 1,500m freestyle disciplines at the same age.

After having to stay away from home at a very early to practise in the Army environment, at just 16 Nguyen is very mature for his age. In a conversation with Nguyen after the 30th SEA Games, he talked a lot about the first days he came to swim and about how homesick he felt when leaving home for training at the National Defence Sports Centre No. 5 in Ho Chi Minh City.

“When I first came to HCM City, everything was strange to me, so I was very scared. Feeling homesick, I usually sat alone in a corner to cry and even asked to return home. For that reason, I was often scolded by trainer Tuan. But he loved me very much and cared for me carefully,” the youngster stated. Such nostalgia and hard work paid off when within only six years, from a boy who could not swim, Nguyen became the SEA Games champion in two medley events to the surprise and admiration of every one.

At the age of 16, what the Quang Binh-born athlete has achieved is really amazing. The success on his SEA Games debut will be a launchpad for Nguyen to look towards greater goals in the continental and world areas in the future.

Some information about Tran Hung Nguyen:

Starting swimming at the age of 10 at the Defence Sport Training Centre 5.

Competing in the relay events at the 2016 National Swimming Championships when he was just 13.

Called up to the national team from January 2016.