The Government has allowed employees of state organizations to have five straight days off on the Reunification Day, April 30, and International Labor Day, May 1 holidays, thus giving hopes that travel firms could do good business this time.

The Government has allowed employees of state organizations to have five straight days off on the Reunification Day, April 30, and International Labor Day, May 1 holidays, thus giving hopes that travel firms could do good business this time. 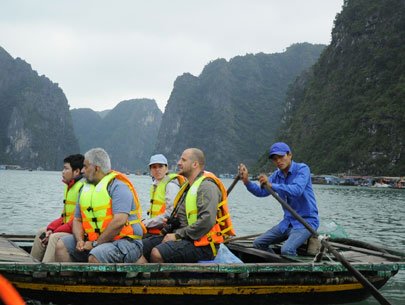 Tour operators are quick to roll out a variety of tours with attractive promotions for the long weekend holidays.

Another special offer of Saigontourist for the forthcoming holidays is a six-day tour that takes in Hanoi, Yen Tu Mountain, Halong Bay, Ninh Binh and Sapa and combines with Halong Carnival in Halong Bay in Quang Ninh Province. The tour departs on April 30 and costs VND9.595 million (US$370). Meanwhile, the firm’s three-day tour of Hanoi and Ha Long costs VND3.250 million (US$154.2).

For tours of Asian destinations, Saigontourist has a Thailand tour with prices ranging from VND7.99 million to VND10.5 million (US$379-498) a guest. VND3 million will be taken off for each early bird.

For Europe tours, Saigontourist charges VND69.99 million (US$3,321) on each guest based in HCMC wishing to travel to Turkey and Greek for eight days, with departure set for April 26. The price for travelers departing from Hanoi is lower, at VND55.9 million (US$2,653).

Saigontourist said 15,000 customers had booked tours during the upcoming holidays by late last week, an increase of 10-15% over last year.

Another travel firm in HCMC, Fiditour, is offering more than 300 short and long-haul tours. The two most favorite tours arranged by Fiditour are a three-day visit to Nha Trang priced at VND5.995 million (US$284) and a Hue-Thien Duong Cave-Trui Lake-Danang-Ba Na-Hoi An trip for five days at VND8.450 million (US$401).

Fiditour’s international tours that attract large numbers of bookings are a six-day tour of Singapore and Malaysia, which departs on April 27 in HCMC and costs VND16.055 million (US$762). The 11-day Denmark-Norway-Sweden-Finland-Poland tour costs around VND99.9 million (US$4,741).

Vietravel is launching a promotion with a discount of VND3 million for a five-day Hanoi-Sapa-Yen Tu-Halong and a Ba Be-Bac Can-Cao Bang-Ban Gioc Waterfall-Lang Son tour, which are both priced at VND8.590 million (US$407).