Saigontourist and Saigon-Ban Gioc Co., Ltd will introduce the first phase of the project of Saigon-Ban Gioc Resort in Dam Thuy Commune, Trung Khanh District in the northern mountainous province of Cao Bang on December 15.

The four-star resort is located at Ban Gioc Waterfall, one of the most imposing waterfalls in Asia and covers an area of 31.15 hectares. Tourists can admire a spectacular valley at Ban Gioc and Nguom Ngao Cave and peaceful view of the border gate, In the first phase, the resort will have 20 rooms, a reception area, a restaurant serving Western and Asian cuisines and a conference hall with a capacity of over 200 guests.

In the next phase, Saigontourist and Saigon-Ban Gioc will add 80 more rooms, a sports center, an entertainment zone, a spa and an area for camping and outdoor events.

According to the investor, 95% of employees working at the resort are Tay ethnic minority people who were trained by Saigontourist tourism school and have then worked at four and five-star hotels under the management of Saigontourist in HCMC.

The resort targets both locals and foreigners, and especially Chinese-speaking guests who travel through the border gate.

Guests will be charged about VND800,000 per room per night. The resort will also offer tours for tourists to explore unique venues in Cao Bang Province, including Pac Bo Cave, Lenin Stream, Thang Hen Pond and a newly established Phat Tich Truc Lam Pagoda and to enjoy art performances by mountainous people. 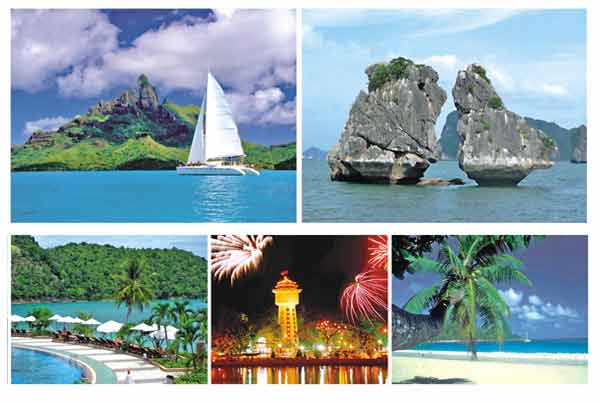 Ben Thanh Tourist is launching a special tour for its clients on occasion of celebrating its birthday.

With this tour, tourists will be traveled Mui Ne, Hon Rom tourist site and Ta Cu Mountain and stayed at four star resorts.

Tourists can book tour via hotline 0919138 217 or visit website: www.benthanhtourist.com

Operated by Phuong Trinh Joint Stock Company, the service aims to meet the rising demand in transportation, tourism, medical checkup and trading between the two localities and the two countries as well.

Binh Duong, together with the southern province of Dong Nai and Ho Chi Minh City, are amongst the most attractive FDI destinations in Vietnam.

In the past 11 months, it ranked third in terms of disbursed foreign direct investment with US$1.42 billion after northern Thai Nguyen province and Ho Chi Minh City.

Travel companies in HCM City have reduced the price of many domestic tours for the New Year holidays.

The price of tours via flights has falled by VND1.5-4.9 million (US$70-230) as the cost of road and flight transport has declined as a result of a drop in fuel prices.

The number of tourists booking tours for Christmas and the New Year has increased by 15-30 per cent against last year, according to travel companies.

Many tours departing on January 1 have been fully booked, said travel companies.

A market along National Highway 32C near the Ban Hoc Bridge in Van Chan District's Suoi Bu Commune in the northern province of Yen Bai sells all of its produce for VND5,000 (US$0.2) each.

Ethnic Mong, Dao and Tay sell their vegetables, fruits and other agricultural produce at the market, as well as banh chung (square-shape glutinous rice cake) and medicinal herbs.

The market opened about 15 years ago. Previously, ethnic people in the area took their produce to the Van Chan District Market to sell.

On the way to the market, they sold their produce along the highway and then gradually set up a one-price market there.

The red colour of ripened coffee beans looks prominent among green leaves. Tourists can see that farmers are now busy harvesting and drying coffee beans. The region has more than 620,000ha of coffee.

Tay Nguyen is well-known for gong culture and ruou can (a kind of wine drunk out of a jar using pipes).

UNESCO recognised the cultural space of the gong in Tay Nguyen as a Masterpiece of the Oral and Intangible Cultural Heritage of Humanity in 2005.

The region also has many attractive destinations such as Don village in Dak Lak Province, Yaly waterfall in Kon Tum Province and Dieu Thanh waterfall in Dak Nong Province.

At Don village, tourists can take a ride on an elephant.

Da Nang will continue its tourism promotion programme next year to attract more domestic and foreign tourists to the central city, according to the municipal People's Committee.

Based on the success of the tourism promotion programme in 2014, the city will encourage companies to diversify their tourism products.

The city will also organise more cultural, tourism and sport events next year.

Da Nang is famous for its landscapes such as Hai Van Pass, Viet Nam's most famous pass, the Son Tra Peninsula, the legendary Ngu Hanh Son (Five Marble Mountains) and the Han River.

As of the end of the third quarter, the city had received more than 3 million tourists, up 19 per cent against the same period last year.

Vietnam will no longer invite tourists around the globe to explore its “hidden charm,” but to savor the country’s “timeless charm,” local tourism officials said as a new logo and slogan for the industry was unveiled Thursday.

The “Vietnam – Timeless Charm” slogan and the five-petal lotus logo have been featured in the country’s tourism promotional campaigns since 2012, after the erstwhile identity “Vietnam – The Hidden Charm” concluded its 2005-2011 mission.

But it was not until yesterday that the Vietnam National Administration of Tourism (VNAT) officially introduced the complete brand identity and guideline on using it during a ceremony in Hanoi.

The document is intended to help tourism agencies and localities properly use the new logo and slogan in their tourism promotional campaigns.

The new logo was designed by artist Tran Hoai Duc, using the image of a lotus to symbolize the beauty of Vietnam and the soul of its people, according to the tourism administration.

The blooming lotus demonstrates a new developing stage of the tourism industry, while its five differently-colored petals represent the diversity of tourist products, fantastic experiences and beautiful feelings of tourists when visiting Vietnam.

The blue petal is for sea and island tourism, green for eco and natural, orange for cultural and historical, and violet for adventure tourism, whereas pink reflects the hospitality and dynamism of Vietnamese people, according to VNAT.

The basic value of the Vietnamese tourism brand is “time,” “intensity,” “mystery,” and “commitment,” Tuan said.

The new brand identity is intended to prove that Vietnam is a destination that provides tourists with a relaxing time, while its tourism resources including seas, islands, mountains and forests will give holidaymakers intensive experiences and feelings.

The Vietnamese culture, with its diversified ethnic groups, religions and Eastern customs and traditions, is still a mystery to international tourists, and the country’s tourism industry is committed to providing the best service to worldwide travelers.

Along with the four key values, the new brand identity also introduces four main product lines, including sea and island; culture; nature; and city tourism, according to VNAT chief Tuan.

VNAT is slated to organize training workshops to explain the guideline in key tourism provinces and cities such as Hanoi, Da Nang and Lam Dong.

The new brand identity is built with support from the EU-funded Environmentally and Socially Responsible Tourism Capacity Development Program.