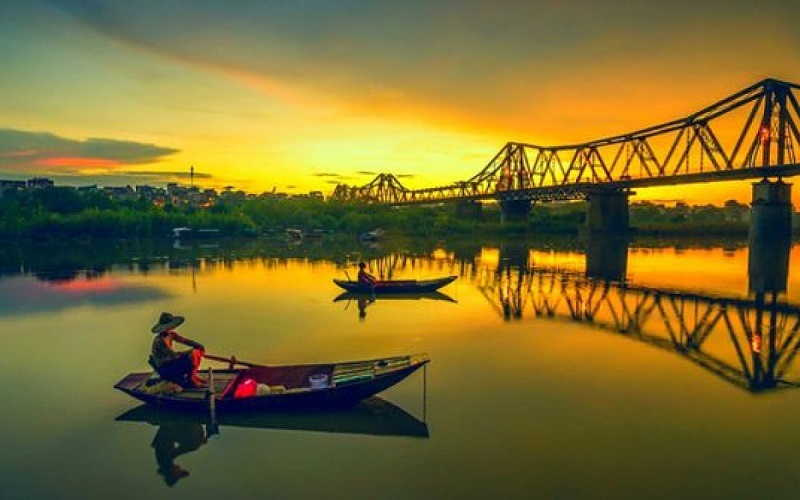 Hanoi, as its name suggested, it’s a city surrounded by rivers, blessed with beautiful nature by Red River and the city's rich history and culture.

Tours on Red River promise interesting experiences but only a few are offered currently, mostly due to the poor infrastructure.

The Red river flows 510 kilometers into Vietnamese territory, of which its more than 120 kilometers through Hanoi, creating a nice landscape that attracts many people to come and enjoy its beauty.

Along the banks of the Red River, there are many popular historical and cultural relics such as Chem Temple in Bac Tu Liem district; Ghenh Temple in Long Bien district; Dam Temple in Thuong Tin district, among others.

Also, on the river, there are city’s important bridges like Long Bien of French architecture with a history of more than 100-year-old, Thang Long - a symbol of Vietnam and Soviet Union friendship or Nhat Tan, a newly built bridge - a symbol of Hanoi’s development and in global integration.

By Red River lies Bat Trang traditional pottery village, an interesting tourist attraction. Getting to the village by river promises a new experience for tourists.

Representatives of Wild Lotus JSC Hoang Thi Kim Van said “Traveling on the Red River, the most interesting thing is to see the scenery and visit the temples and pagodas on the river’s bank. I discovered a lot of things, a new experience totally different from a road tour.”
Red River tour development faces challenges

Despite the potential, current tours on Red River are offered at a small scale. Each year, this only attracts about 300,000 travelers on average, of which international visitors account for about 30%, according to travel agents.

At the moment, only some groups of visitors are interested in this route as a combination of ecological and spiritual tourism.

Many relics along the Red River await investment for becoming typical tourism products. Without proper investment, it is difficult for tourists to buy the tour twice.

Moreover, the poor infrastructure is the largest challenge of this tour. There is a lack of international standard boats and wharves, according to Mr. Ta Minh Hung, Director of Thang Long GTC JSC which offers several tours on the Red River.

Currently, only Da Hoa Temple and Bat Trang’s wharves are in good condition. Those of other destinations are very poor and unsafe, making it difficult for the water traveling, especially in the dry season when the water level is low.

In addition, there are temporary houses, garbage and construction debris in many sections of the river, creating ugly sights .

The Red River tour is only suitable for domestic tourists at the moment, according to Director of Phuong Hoang Tourism Company Hoang Dang Bich Tho. To attract international arrivals, it requires a lot of changes, for example, creating specialized tourism products like focusing historical and cultural features of each destination and traditional craft villages on the riverside, improving service quality, etc.

To develop Red River tours, it requires the cooperation of the National Administration of Tourism, the Hanoi Department of Tourism and other authorities to build infrastructure, according to experts.

It is a long-term process for the planning and construction of the system of water traffic and wharf and the riverside landscape, according to Chairman of the Vietnam Tourism Advisory Board Tran Trong Kien.

In addition, it is also necessary to advertise river tourism products in key markets, promote investment by national and international companies in high-quality cruises with floating restaurants, etc.

Hanoi has issued a construction master plan up to 2030 with a vision to 2050, in which the two sides of the Red River will be the ecological axis of the city ecological axis connecting the capital with other regions with green parks and cultural and entertainment works.

This prospect, however, is futuristic, according to Mr. Kien, for the time being, Hanoi should have the planning to create new tourist destinations by Red River. Actions should be taken to improve its environment such as relocating some dumpsites along the river, expanding ecological zones for planting fruits and vegetables, building venues for traditional art performances, among others. It is the foundation for the Red River’s tourism development, according to experts.

When these problems are solved, the Red River tours would become an appealing tourism product of Hanoi, they said.