Most schools require IELTS 4.5 English skill level for their graduates in non-linguistics majors, but this is seen as too low by many educators.

According to Do Van Dung, rector of the HCM City University of Technology and Education, along with requirements on expertise, the school attaches importance on foreign language skills. 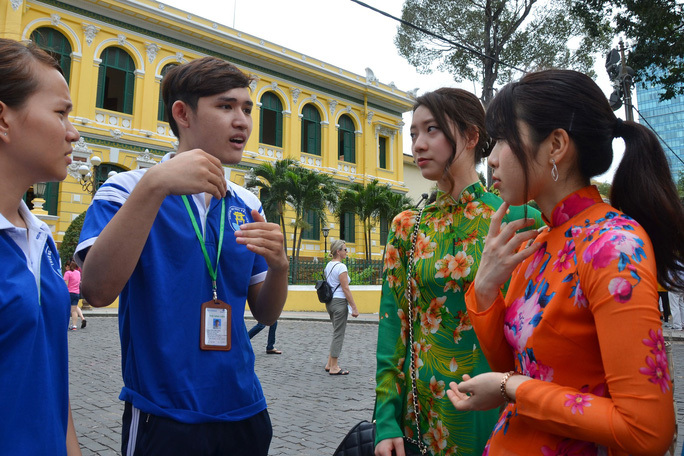 Dung stressed that modern university graduates not only need to have deep professional knowledge, but good foreign language skills as well. It is estimated that only 58 percent of students can receive bachelor’s degree, while 42 percent cannot finish school because they cannot meet the standards on foreign language skills.

Dung said that previously businesses which employed the school’s graduates complained about their weak foreign language skills. The school vowed to improve the weakness.

Hoang Duc Long, rector of the HCM City Economics & Finance University, said the required standards on foreign language skills is IELTS 4.5. However, Long thinks the requirement is low and wants to raise the required level.

According to Huynh Thanh Hung, Vice Rector of the HCM City Agriculture and Forestry University, non-linguistics students must have B1 level in European standards to be able to graduate from the school. He said that a high proportion of students still cannot receive bachelor’s degree because their foreign language skills cannot meet B1 level.

The required standards set by schools vary depending on curricula and other factors, but most schools require IELTS 4.5 or equivalent level.

Improving English skills of students to satisfy the needs of global integration has been a headache for schools.

Reports show that students from large cities have better English skills than ones from small cities and provinces.

According to La Vu Thuy Anh from Ton Duc Thang University, the school requires IELTS 5.0 for non-linguistics majoring students. The level is not high for students from large cities, but difficult to reach for students from remote areas.

Hung said the quality of students varies and it is difficult to raise requirements on foreign language skills fir graduates. He agrees with the opinion that improving English skills of students needs to be done at general schools first.

American man teaches English to the poor in Vietnam

To help a child cope with destiny, it is be helpful to give them an education.