The weak English skills of incoming students, the big difference in students’ abilities and the high number of students in every class will all make it hard to implement the national foreign language teaching program at universities.

VietNamNet Bridge – The weak English skills of incoming students, the big difference in students’ abilities and the high number of students in every class will all make it hard to implement the national foreign language teaching program at universities. 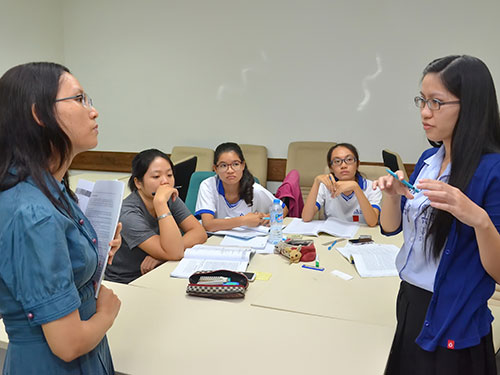 All the students entering the HCM City University of Education in the 2014-2015 academic year had to sit an English test. Eighty out of the 2,113 students were recognized as meeting B1 standard, or the third level in the six-level ranking system set by the Ministry of Education and Training (MOET). At least 342 students met the second level and 2,457 the first level.

At Tay Bac University, a survey conducted in 2013 showed that 99 percent of the 2,520 students only met A0 standard, or the lowest level.

This means the MOET requirement on having 100 percent of high school students meeting the third-level of the national English standards remains unreachable.

Tay Bac University decided to organize an English supplement class for 30 students, aiming to help them improve four English skills of listening, speaking, reading and writing. The class was scheduled to run for five months with 300 teaching periods.

However, the plan failed because students did not attend the lessons.

Luu Thi Kim Nhung and Bui Thi Dieu Quyen from the Hanoi University of Education, after conducting a survey, found that students are better at grammar, while they are weak at listening. Therefore, many students “lose their heads” when listening to lectures in English.

They also pointed out that there exists big difference in the English skills of students. Less than 20 percent of the school’s students have third-level English skills.

The existing problems have caused problems for universities which are asked to implement the national foreign language teaching program, under which university graduates must have skills good enough to satisfy the requirements of their future jobs.

Dr. Huynh Cong Minh Hung from the HCM City University of Education suggested that it is necessary to test the students’ English qualifications every year so as to give them suitable teaching lessons.

He also thinks that it is necessary to give more teaching hours, saying that students do not have much time to practice English as the number of teaching hours designed for non-English majoring students is too low.

Do Duy Hoang from the New Education Technology Company has suggested a model of teaching English with support of information technology. There are four major features of the model 1) training in pedagogical practice method for teachers; 2) introducing textbooks compiled by Cambridge University experts to students at different levels, from A1 to B2; 3) using online lesson plans and 4) using online testing.