The Apple Watch Series 1 are being sold without charging accessories and watchbands.

The Series 1 was introduced in 2015. The manufacturer stopped making the product long ago and no products are distributed officially. However, they are still available in Hanoi. Private shops import used Apple Watches and sell for VND2 million. 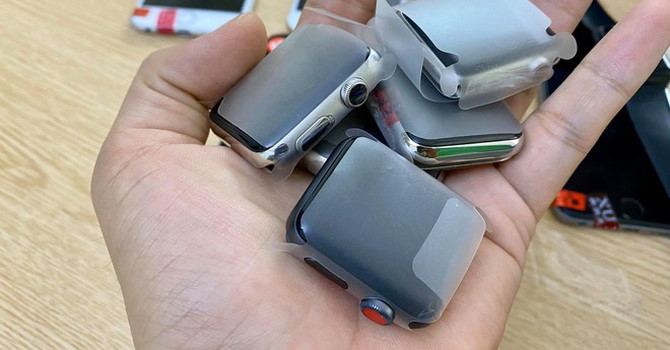 “Apple Watch is favored by many Vietnamese more than smart watches of other manufacturers. Apple is always a favorite brand in Vietnam,” Hoang Giang, the owner of an iPhone shops in Hanoi, explained.

Also according to Giang, Apple Watch products were launched a long time ago and their appearance is no longer good. Cracks may be found in the frame of some products. The short battery use is also a problem of the products.

According to Vu Duy, the owner of a shop specializing in distributing Apple’s products, said the Apple Watch products have different sources, but they are mostly imported from China.

“Dealers import products in large quantities and distribute to private shops. However, the quality of the products is questionable. It is highly possible that the accessories of the smart watches have been replaced. They are not original,” Duy said, adding that it is nearly impossible to find which products have accessories replaced.

A consignment of Apple Watch arrived in Vietnam last July and they were sold at VND2 million. On some forums, users complained about the quality of product. Most of them had connection problems and got hot very quickly.

“The components inside these Apple Watches are quite messy. Sticky glue appears on the board. Some machines have even had their covers replaced,” Tuan Khanh, the owner of an Apple product repair shop in HCM City, said.

Khanh went on to say that users will meet problems with Apple Watches after two months of use. To minimize risks, users should request shops for a 6-month warranty, or choose late-generation models such as Apple Watch Series 3 or newer models.

Apple is always a strong brand in Vietnam, which explains why used Apple smartwatches are still more expensive than brand new Chinese products.

Hayloy LS01, which just hit the Chinese market some days ago, is available in Vietnam. It is offered by some private shops at VND500,000 only. It has 1.3 inch screen and resolution of 240x240 pixels.

iPhone XS and XS Max with faulty Face ID are being offered by some private shops at prices VND2-3 million lower than nearly brand new (99 percent) products. However, their quality is questionable.