Pham Phu Hoa, deputy general director of the Viet Nam Professional Football Joint Stock Company (VPF), has announced that his company was seeking new sponsors for the V-League in the 2015 season.

Pham Phu Hoa, deputy general director of the Viet Nam Professional Football Joint Stock Company (VPF), has announced that his company was seeking new sponsors for the V-League in the 2015 season. 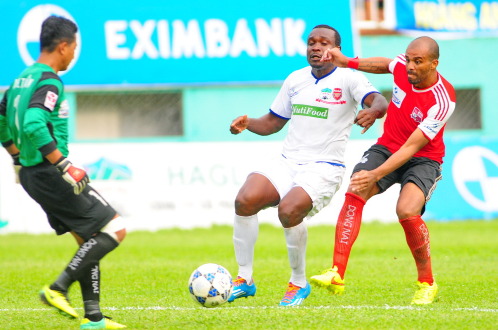 Eximbank would not continue to be V-League sponsor after the end of their contract this year.

VPF, owner of the national football leagues, confirmed that Eximbank, the main sponsor who has worked with the V-League, the premier tournament, would not continue after the end of their contract this year.

Eximbank has been sponsoring the V-League for four years since 2010 with a VND30-billion (US$1.43-million) deal per year.

Hoa said the present VPF leadership was in discussions with some prospective partners, but nothing has been confirmed yet. He expected VPF to have co-sponsors next season.

VPF are also seeking sponsors for the V-League 2 and the National Cup.