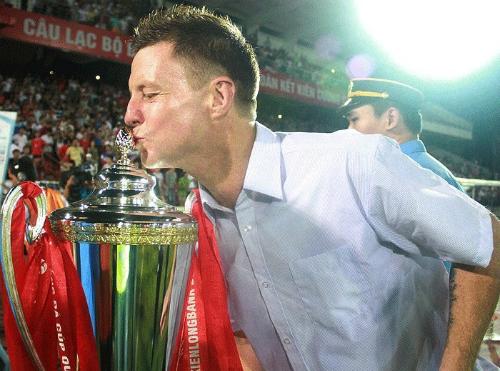 "After the team won the National Cup, I hoped that my contract would be extended. However, the club management board recently informed me about the end of the contract. Tomorrow I am returning to England. I love Vietnam and hope to have the opportunity to come back here to work," said coach Dylan Kerr.

The teams that have qualified for the V-League 2015 are led by Vietnamese coaches.

Similarly, Chinese coach Qi Sung Lap had to say goodbye to Vinh Long FC after the first season - 1999-2000 - because of the team’s poor performance.

Hiring foreign coaches became fashionable when the Vietnam Football Federation (VFF) turned the V-League into a professional tournament in 2001.

Portuguese coach Henrique Calisto is another successful foreign coach. He took Dong Tam Long An to the V-League and then won two consecutive championships in 2005 and 2006.

Such success encouraged local teams to rush to hire foreign coaches. However, since then, no foreign coach has achieved the same level of success of the Thai and Portuguese coaches.