Veterans in the Truong Sa 1988 battle to group up

A meeting with the title "Towards the beloved Truong Sa" will be held in Da Nang City, with the participation of veterans and relatives of martyrs who sacrificed in the battle to save Truong Sa Archipelago in March 1988.

VietNamNet Bridge – A meeting with the title "Towards the beloved Truong Sa" will be held in Da Nang City, with the participation of veterans and relatives of martyrs who sacrificed in the battle to save Truong Sa (Spratlys) Archipelago in March 1988. 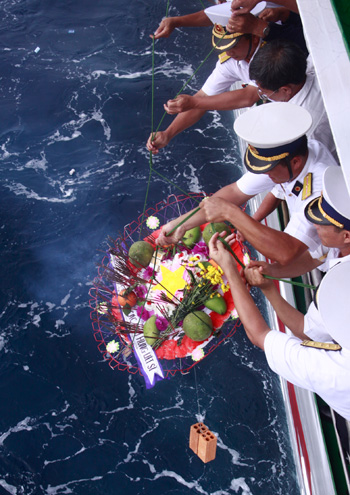 The memorial ceremony of the martyrs who sacrificed in the battle on
the islands of Co Lin, Gac Ma and Len Dao on 14/3/1988.

Mr. Thai Thanh Hung, chairman of the Veterans of Da Nang city, said the meeting will be held on the morning of March 14 (25 years after the battle to protect the Truong Sa Archipelago).

In addition to reviewing the heroic past, the brave and noble sacrifice of Truong Sa soldiers, the organizers will give gifts to the relatives of the fallen soldiers.

According to History of the Navy Region II in 1975-2005 on 03.14.1988, when Vietnamese cargo ships and soldiers were performing tasks on the island of Co Lin, Gac Ma and Len Dao, Chinese warships approached, used large artilleries to fire on the ship HQ-604 at Gac Ma Island, the HQ-605 HQ ship at the Len Dao Island and the HQ-505 ship at the Co Lin island. Chinese troops also landed on the island of Gac Ma to pull up the Vietnamese flags and open fire on Vietnamese soldiers.