Vietcombank has sold the debt owed to it by the Vietnam National Shipping Lines (Vinalines), which is undergoing a mandated restructuring process as requested by the government.

VietNamNet Bridge – Vietcombank has sold the debt owed to it by the Vietnam National Shipping Lines (Vinalines), which is undergoing a mandated restructuring process as requested by the government. 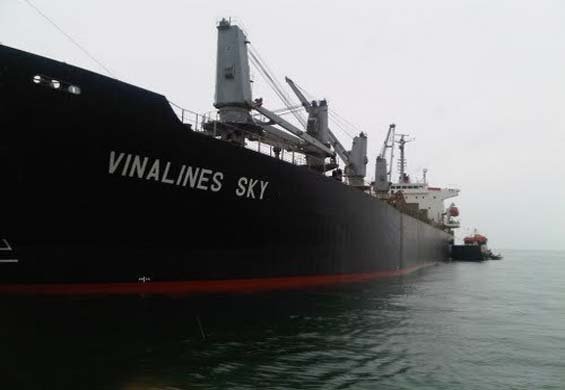 With the sale, Vietcombank is the first credit institution that has sold the shipping company’s debt to the Debt & Asset Trade Company (DATC), an arm of the Ministry of Finance (MOF).

Thoi bao Kinh te Saigon quoted sources as saying that the debts were sold at the “market price” after Vietcombank and Vinalines failed to restructure the debts in the first round.

The debt restructuring was expected to be completed by the end of 2014, but it became obvious that Vinalines could not pay the debts.

The discount value of the debt Vietcombank sold to DATC remains secret, but the source said it is smaller than 50 percent of the principal, while the interest debt has been forgiven.

The debt was incurred by Vinalines when it borrowed $35 million from Vietcombank in 2007 to have 85 percent of the money it needed to buy the vessel Vinalines Sky.

A report showed that by the end of 2013, Vinalines still had not paid $19 million worth of debt to Vietcombank. The creditor then agreed to freeze the debt and reschedule the debt payment.

Vietcombank is one of 22 Vinalines’ creditors who are credit institutions, both foreign and domestic, to which it had reportedly owed VND11.42 trillion by the end of 2013.

Some foreign commercial banks, including the Hong Kong and Shanghai Banking Corporation (HSBC), decided to cut 70 percent of the debts’ value and forgive the interest debt to recollect 30 percent of the principal value, after they realized that Vinalines could not pay the debts in the years ahead.

Vinalines, like the Vietnam Shipbuilding Industry Corporation (Vinashin), had to undergo a compulsory debt-restructuring process in an effort to minimize the insolvency risk.

However, Vinalines, unlike Vinashin, has not received the same support from the government.

Unlike Vinashin, Vinalines has to negotiate with commercial banks themselves on the debt restructuring.

Vinalines’ creditors do not want to lose two-thirds or more of the value of the debt, as suggested by DATC for the debt restructuring.

Vinalines will have to claim debt with DATC and pay fees for the debt payment re-arrangement.

According to DATC’s deputy general Pham Manh Thuong, DATC has reached preliminary consensus with some other credit institutions on debt restructuring.

However, he admitted that the parties could not come to agreement on the debt prices because banks had set overly high prices.

Vinalines has also suggested that banks convert the debt to their capital contribution to the company.